We're on the bus from La Pintada to Pereira, our connection to Roldanillo. Next to me is Silke, happy to look back on our first six days in Colombia, each full of flying in stunning landscapes ...and that she could snag a foto of a colibri in the morning rain at our hotel Real Dinastia, but also slightly down because of her bruised knee from our last, difficult outside landing. But first things first!

We arrived in Colombia on the 9. of June, 2022. A rainy evening. It should later turn out that "La Niña", the cyclone was responsible for so much humidity, morning/evening rain and often a very challenging low cloud base. A slightly illegal Uber drove us to our hostel in Medellin where we met our first colombian room, 8m2 barely fitting a bed. No windows and now air in/out flow. So, the adventure definitely started!

We stayed at Charlies Palace in El Poblado, a recommendable part of Medellin with lots of bars and hipster vibe. The next morning, our guided tour began. We were greeted by Madabeski, our guide for the next 6 days, a paraworld.co partner. Our first destination was Santa Fe de Antioquia where we flew over beautiful lush green mountains along the Cauca river above the marvellous colonial village. Always with very helpful vultures (gallinazos) showing us thermals.. I think, the swiss eagles are better aviators, but don't tell this to anyone. 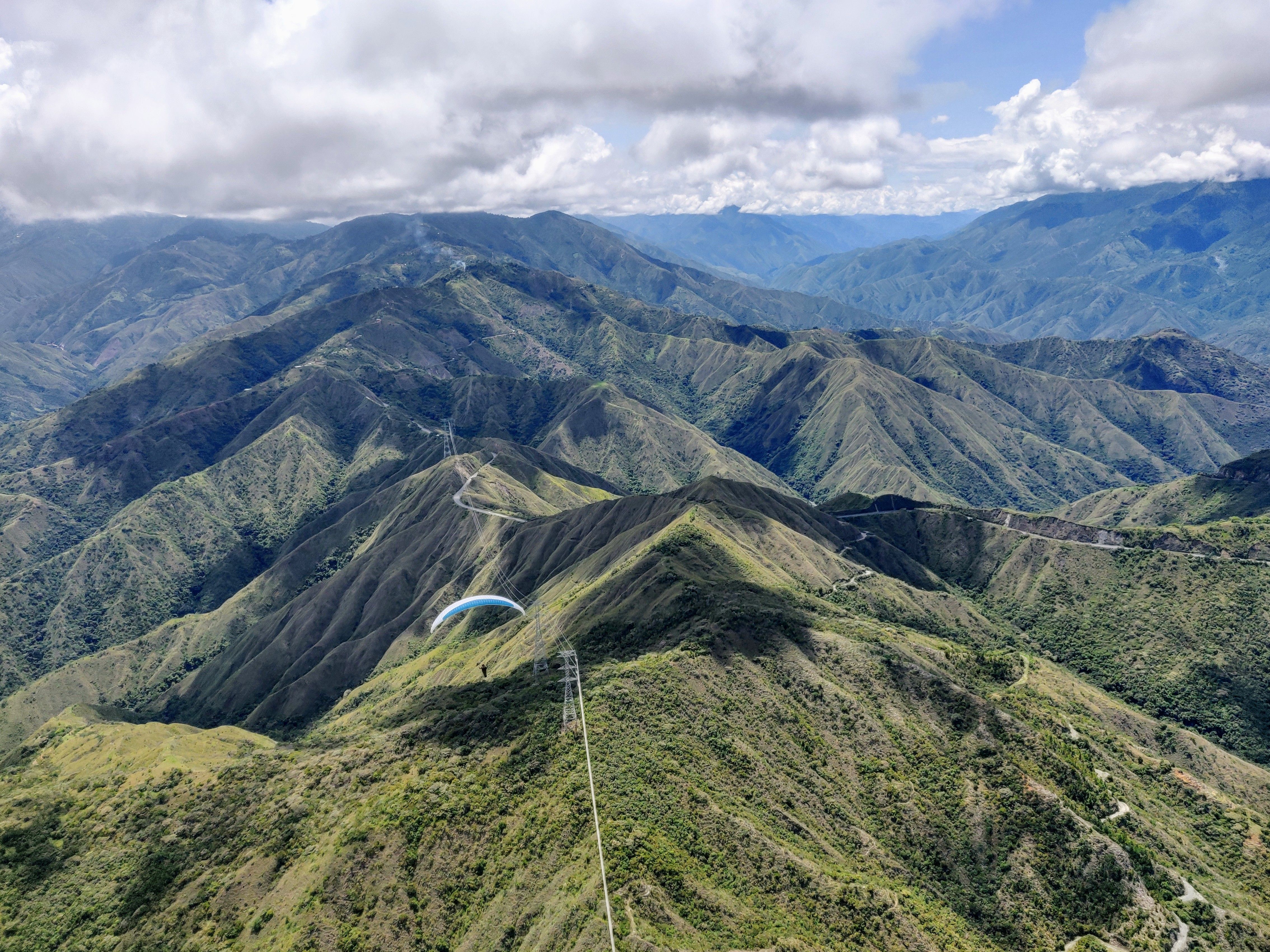 Some nothworty points about flying in Colombian June: 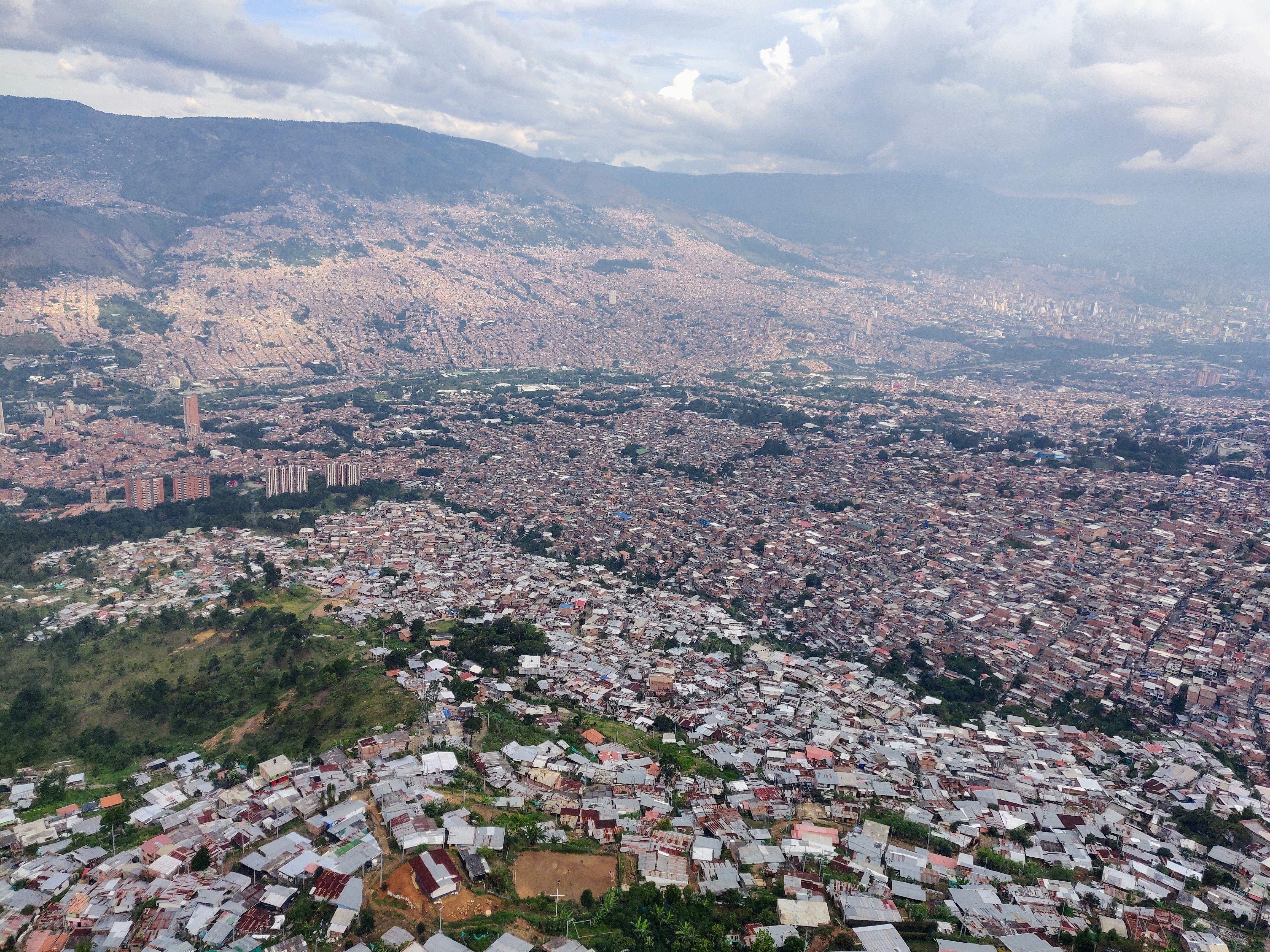 The second day we drove to the Medellin take off San Felix with a stunning view over the city. Again, dancing with the vultures into the sunset..

Time to check out of our prison hotel and hit the road (blocks) southwards. Wow, all the rain destroyed lots of roads and we had quite long to get to Fredonia where we went to Mirador Silencio, another stunning viewpoint/takeoff in development but with side wind. So we drove higher up the mountain but the car stuck in mud and we had to walk the rest (after which Madabeski painstakingly drove bsck down in reverse with 2km/h - well done, Mada!)

On top, we were envelopped in clouds that whirled up from time to time, leaving us few windows to take off which we eventually managed to, and flew between clouds along beautiful mountains. This was Silkes and my first of many landings in which we had to use teamwork to get over/under all the barbwire fences to get to the closest street. This evening we drove up about a kilometer to sleep in Jericho where we arrived in stormy rain. 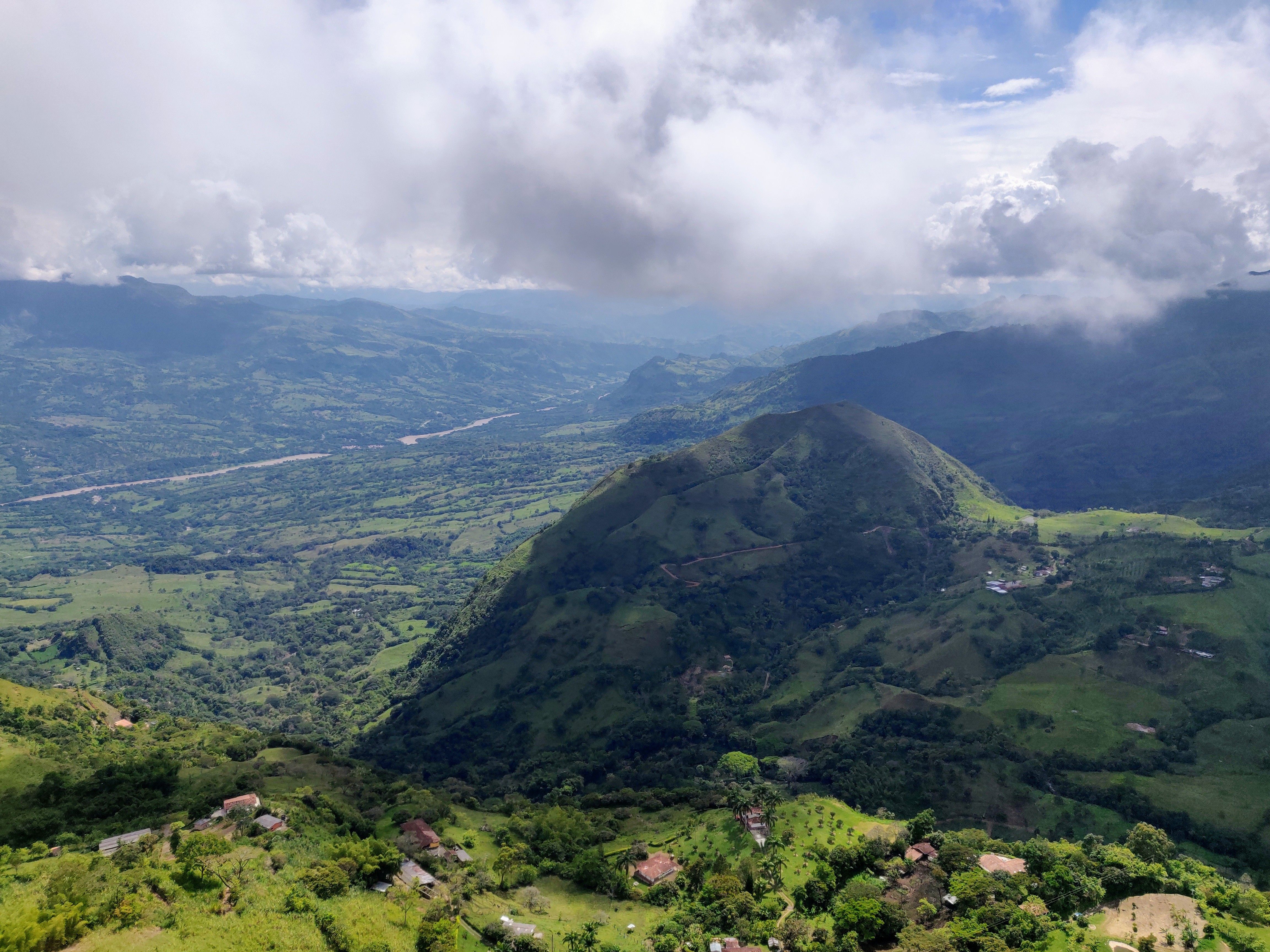 The next morning in Jericho, a religious meeting point because of its 21 churches and early missionary status, a cute guide dog sccompanied us to a viewpoint above the city.

On this day three we had our best colombian flight, yet from a well maintained takeoff from close to Jericho: This takeoff required patience since it's at the cloud base so we had to wait for a window on the otherwise thick grey opaque sky, again, and sneak out. But how we were rewarded... 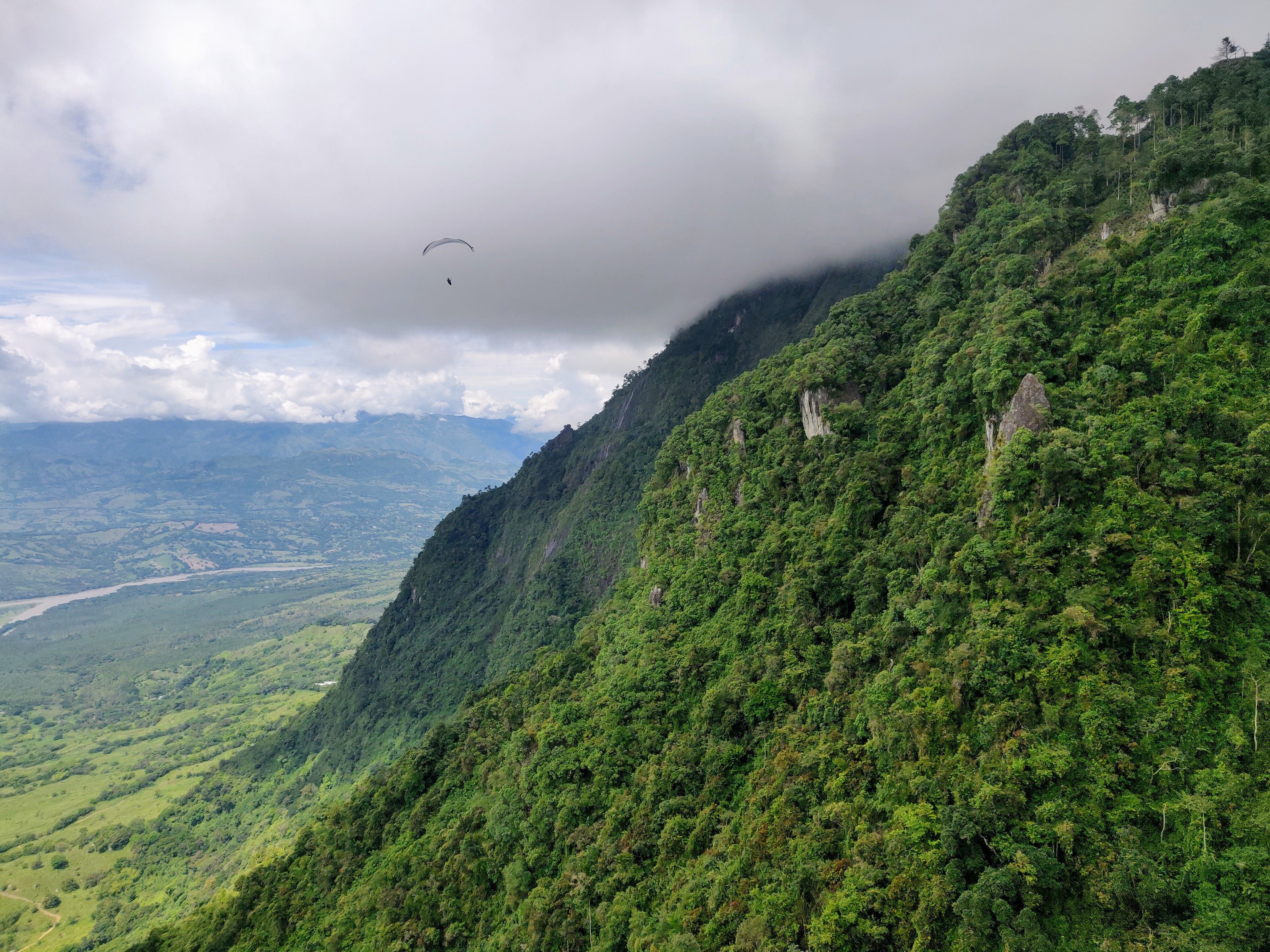 Flying along stunning waterfalls, steep jungle ridges, countless animals audible from beneath, us rising with the calm upwards breeze under the clouds. We managed to fly to La Pintada in two hours and landed - without having planned so - almost next to our hotel for the next 4 nights, Real Dinastia, where we relaxed on the huge pool being the only guests for the day. 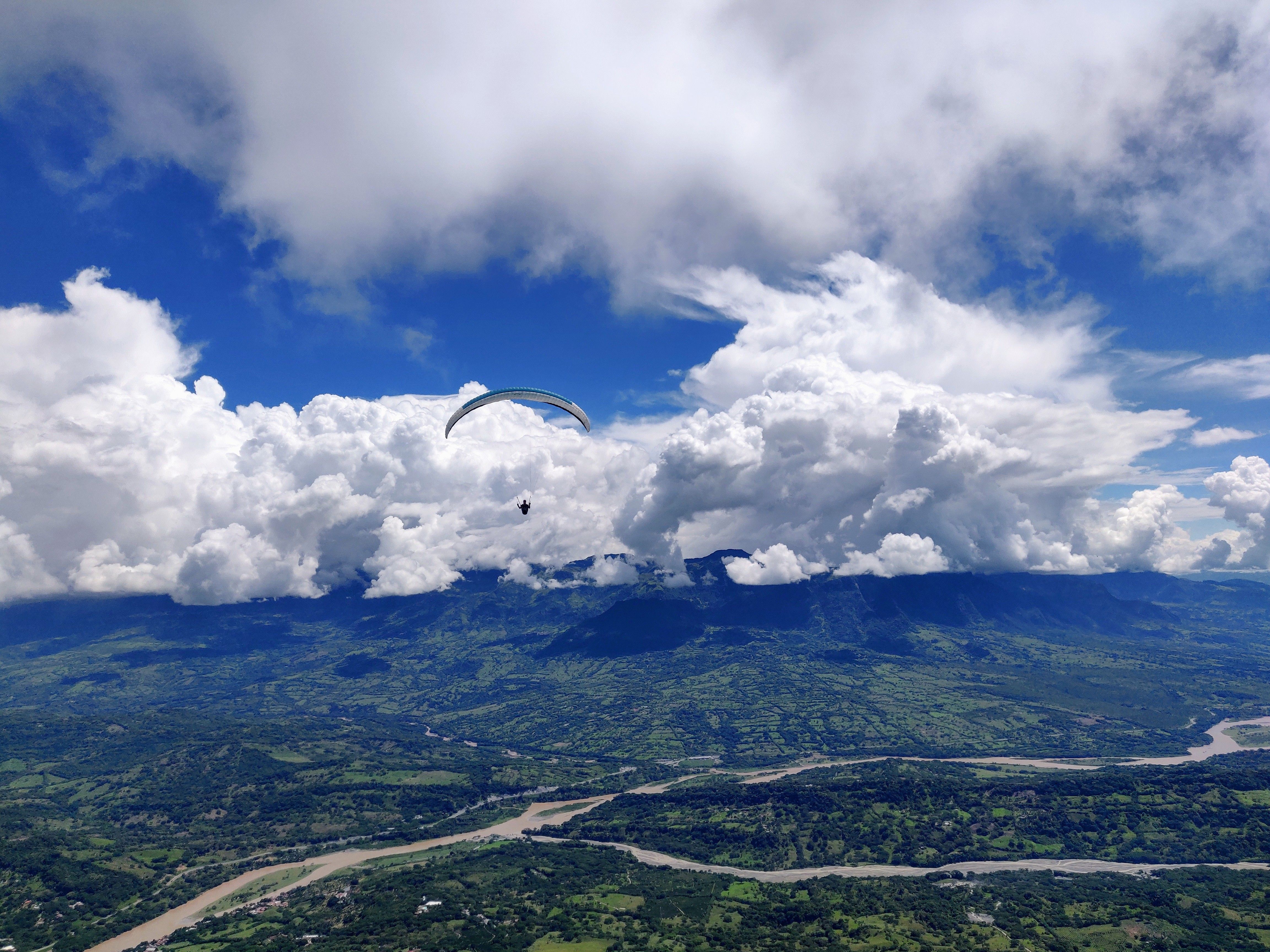 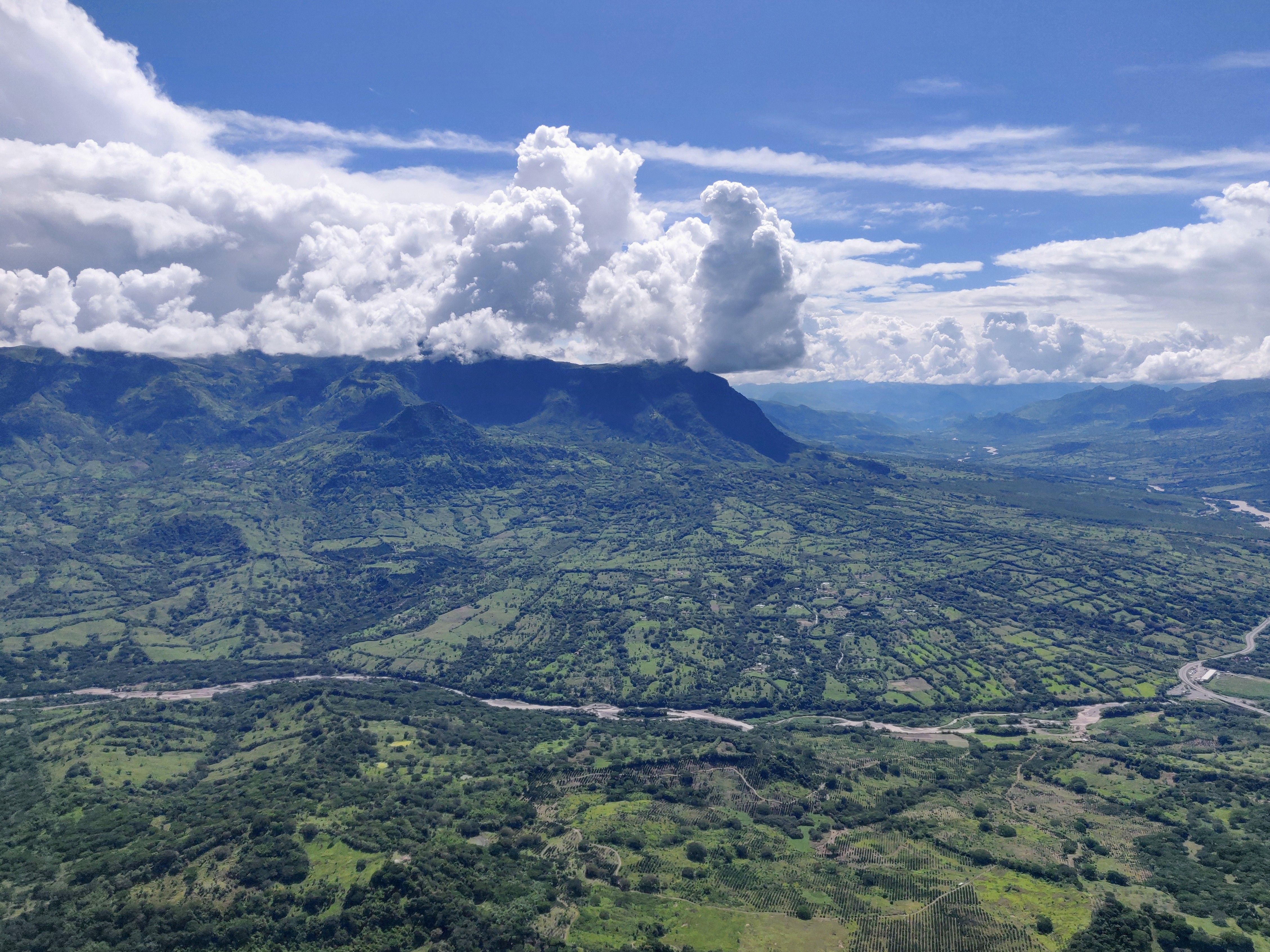 The next day, we flew from Cordoncillo, a take off above La Pintada. The slightly higher base allowed us to cross over to the two Apostoles, two needle peaks, remarkably similar to the Mythen from Schwyz. Along the way, we thermalled with a King Vulture with 2m wingspan. It felt like a dream.

In the evening we strolled through the cool La Pintada village onto the pedestrian river bridge next to a tree full of about a thousand white birds.

The next morning, we found a cat with her cute 5 babies wander between the roof shingles outside our bedroom window. So Real Dinastia is clearly a family hotel! On this last day with Madabeski, we decided to give Jericho another shot since we enjoyed our first flight from there so much. 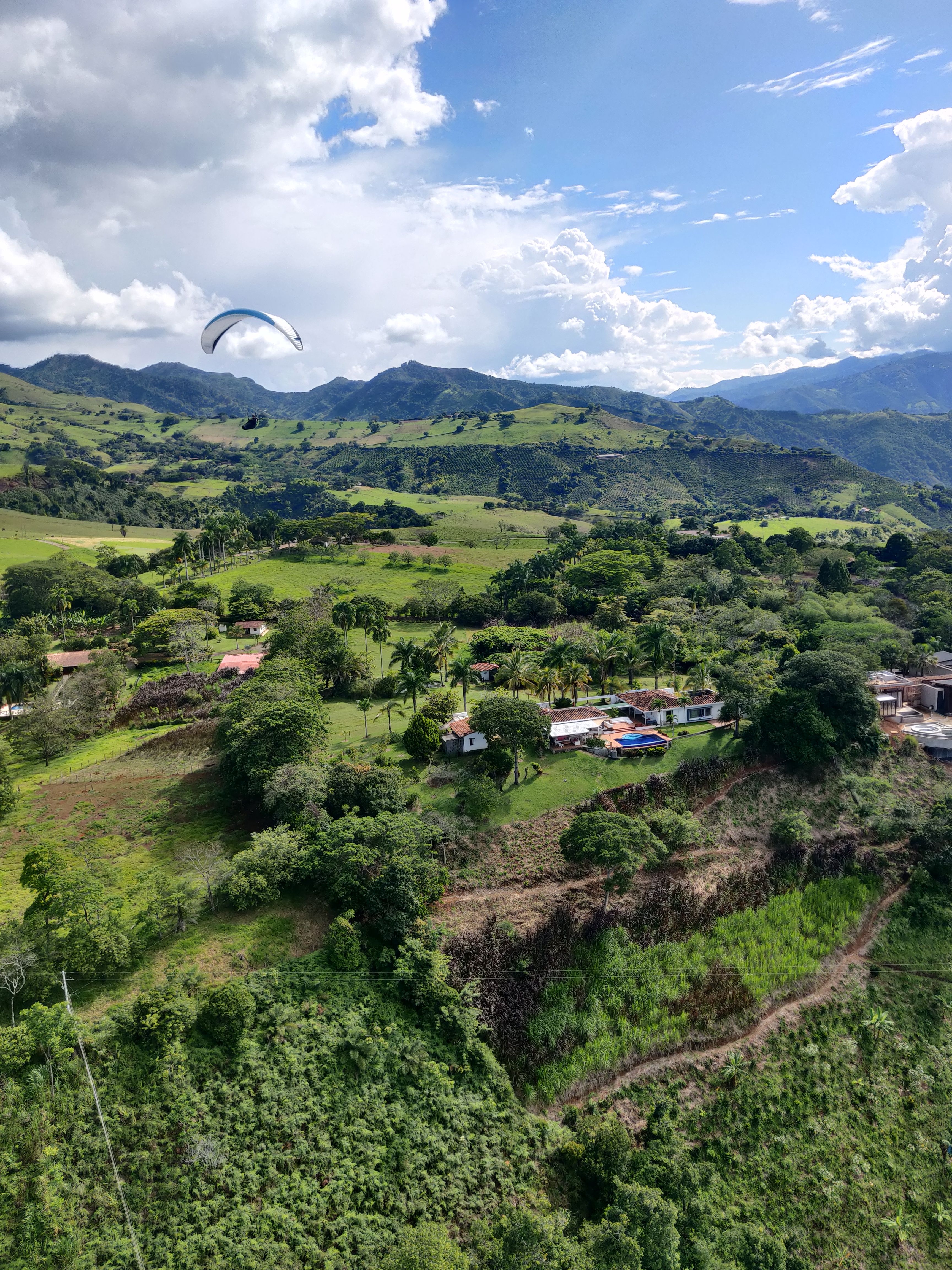 This time we patiently waited for 2h in a grey cloud soup, gliders prepared, ready at a moments notice. And then the clouds opened up and invited us to take off. This flight was more south windy and we flew to the north along marvellous ridges filled with luxury houses and pools. The higher up villages and lakes reminded us of Switzerland. Coming back against the wind was tough but ok. Just on the last 1km I had a sudden lack of thermals and had to land on some very narrow field.

Silke followed suit but on her last curve, she lost lots of altitude and landed in a - thanks god not barbwired - fence and her glider waived into a tree. She loudly called for me so assuming the worst. I ran through the muddy/cow dung filled uneven field to her to find out that she was entangeled in the fence that... was under electricity, shocking her every second.

After freeing her, we saw that her knee was bleeding and hurt, so I packed everything and carried it to the next street where Mada was already waiting. Poor Silke limping along. It was time for a break/recovery day so we prolonged our stay and replanned to take the bus to Roldanillo a day later.

Silke now feels much better and we see no lasting impact on movability and reflexes. It's definitely a reminder to take things easier in the next days and always go for big landing fields... which the Roldanillo Valle de Cauca region is well known for, fortunately. 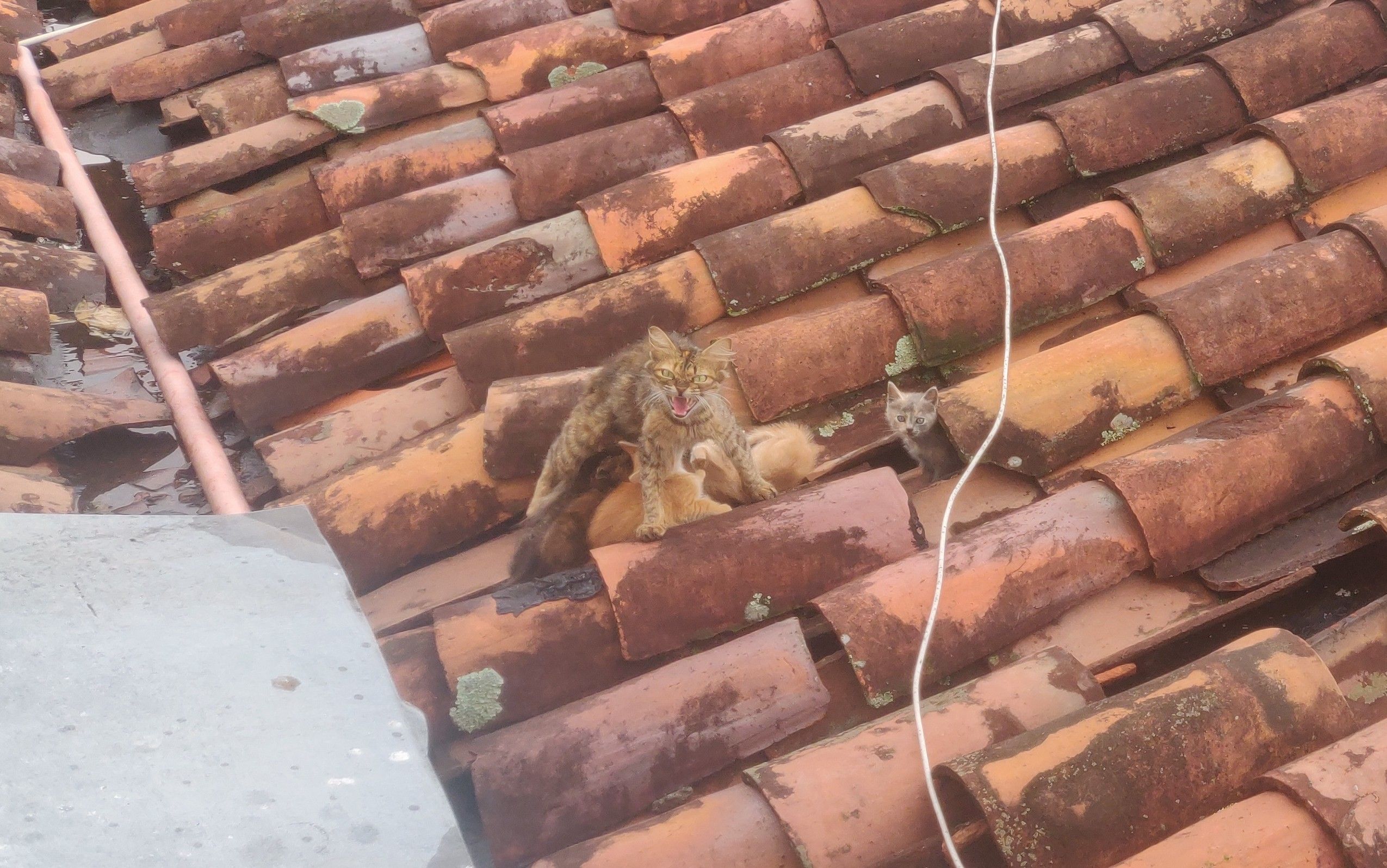