A green plush dino hanging on the reverse mirror is whirlling. We're rushing with a Chevrolet Spark at 110 kmh from the colombian border towards Ibarra along the empty roads of Ecuador... except for bulks of people walking & protesting.

The gas stations have cars lining up for hundreds of meters. There is a huge gasoline shortage and people are in full on revolution mode. A week ago, the ecuadorian indigenous people started demonstrating against rising costs of living. Should we have stayed longer in Colombia? Maybe, but suffice to say, we wanted an adventure and we got one!

We left off last time in La Pintada. Madabeski - our tour guide thus far - sent us off into the unknown. We boarded a bus to Pereira for a small stopover to continue to our final stop in Roldanillo. We were welcomed with many roadblocks and a bit of claustrophobia for Silke since we only had a 10x10cm window. The trip was so bumpy, I was literally flying all over the place. Yes, no seatbelts in Colombia.

In Pereira the bus terminal is well organized and the "De Occidente" (store on the lower floor in the back) bus line is AMAZING. It focusses on paragliding around Roldanillo. Their buses grab you from wherever you land (and we did indeed land wherever) and you never pay more than 1-2 dollars to get back.

But we found that Jorge Samurai (drives a Samurai) is the best, most reliable driver. He owns a finca near Aguapanelas so it's very convenient for him, too. Please contact him for a lift up to 4 pilots: +57 310 3947717

We usually had low cloud base (< 2000AMSL) and early morning fog, so some waiting in the grey was usually involved but once gone, we were able to fly far. North, south, east over the valley... 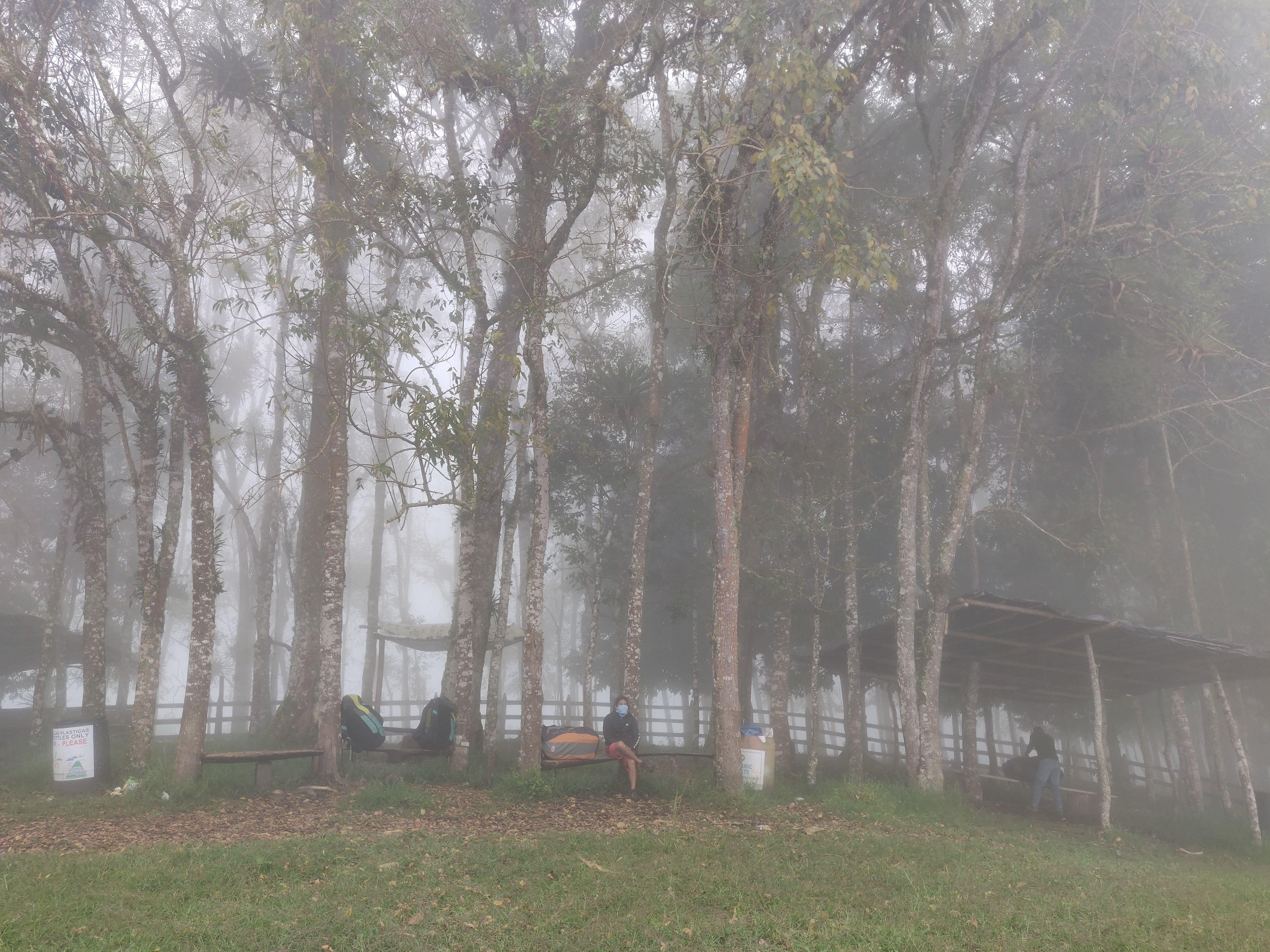 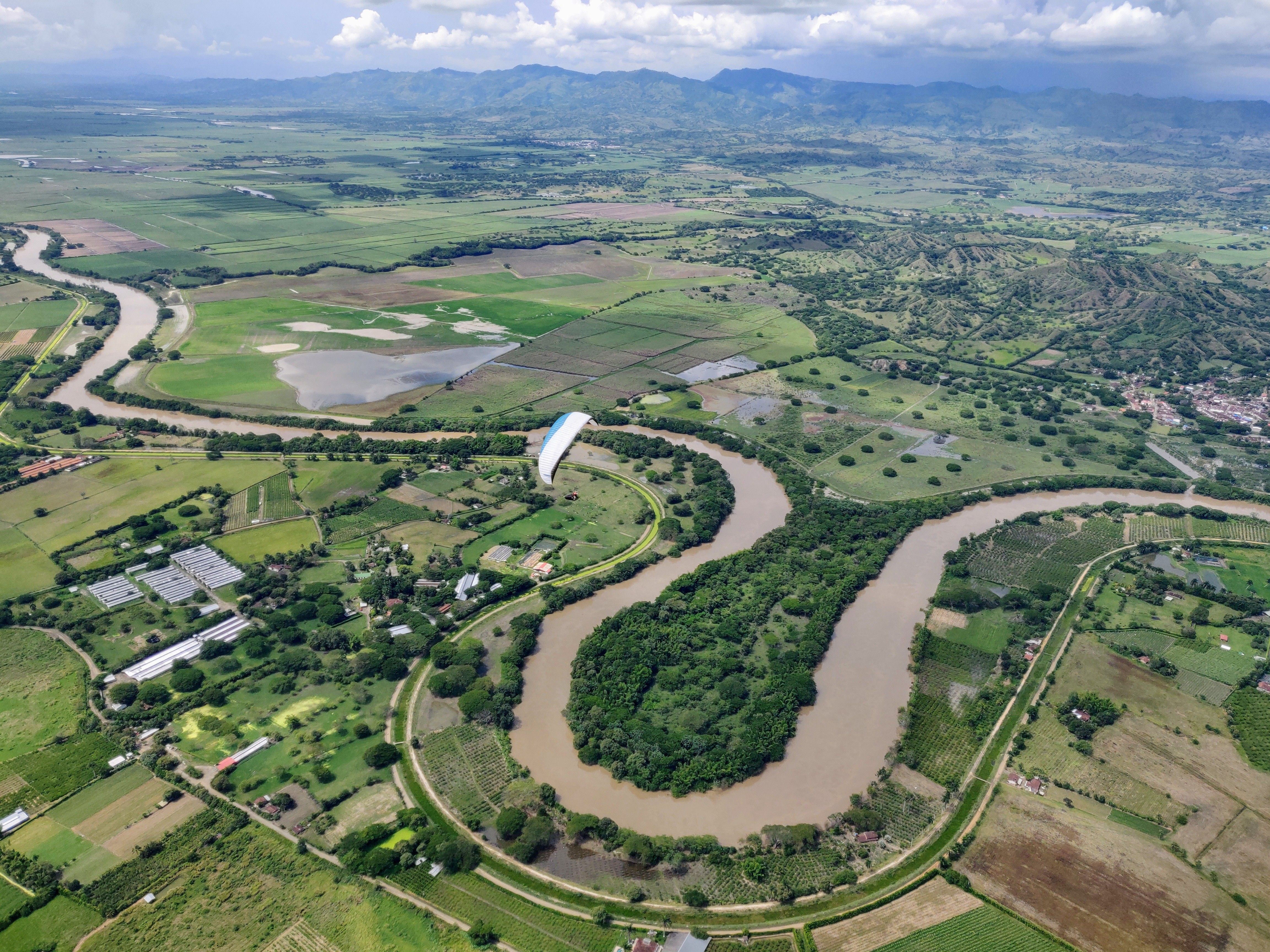 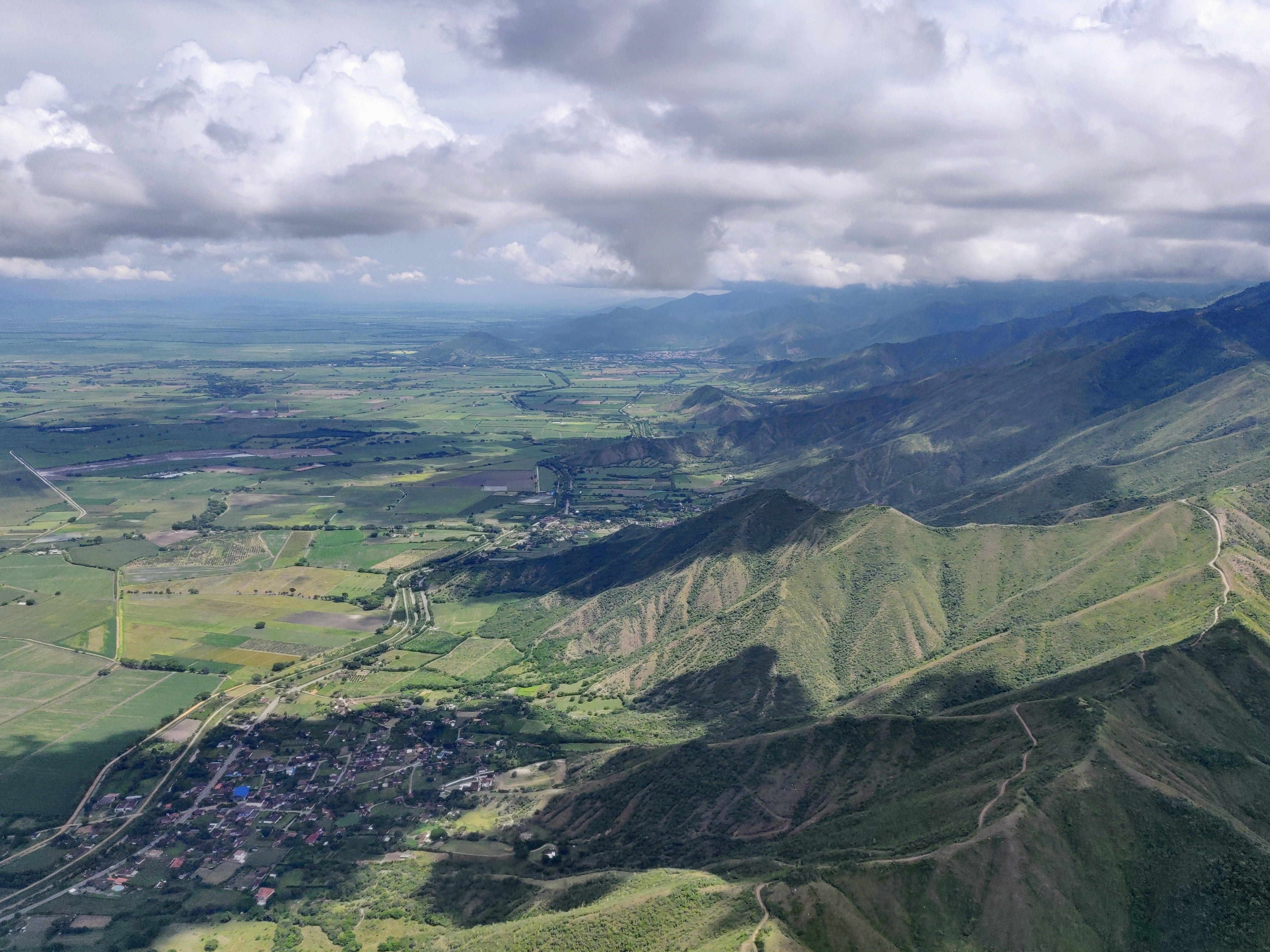 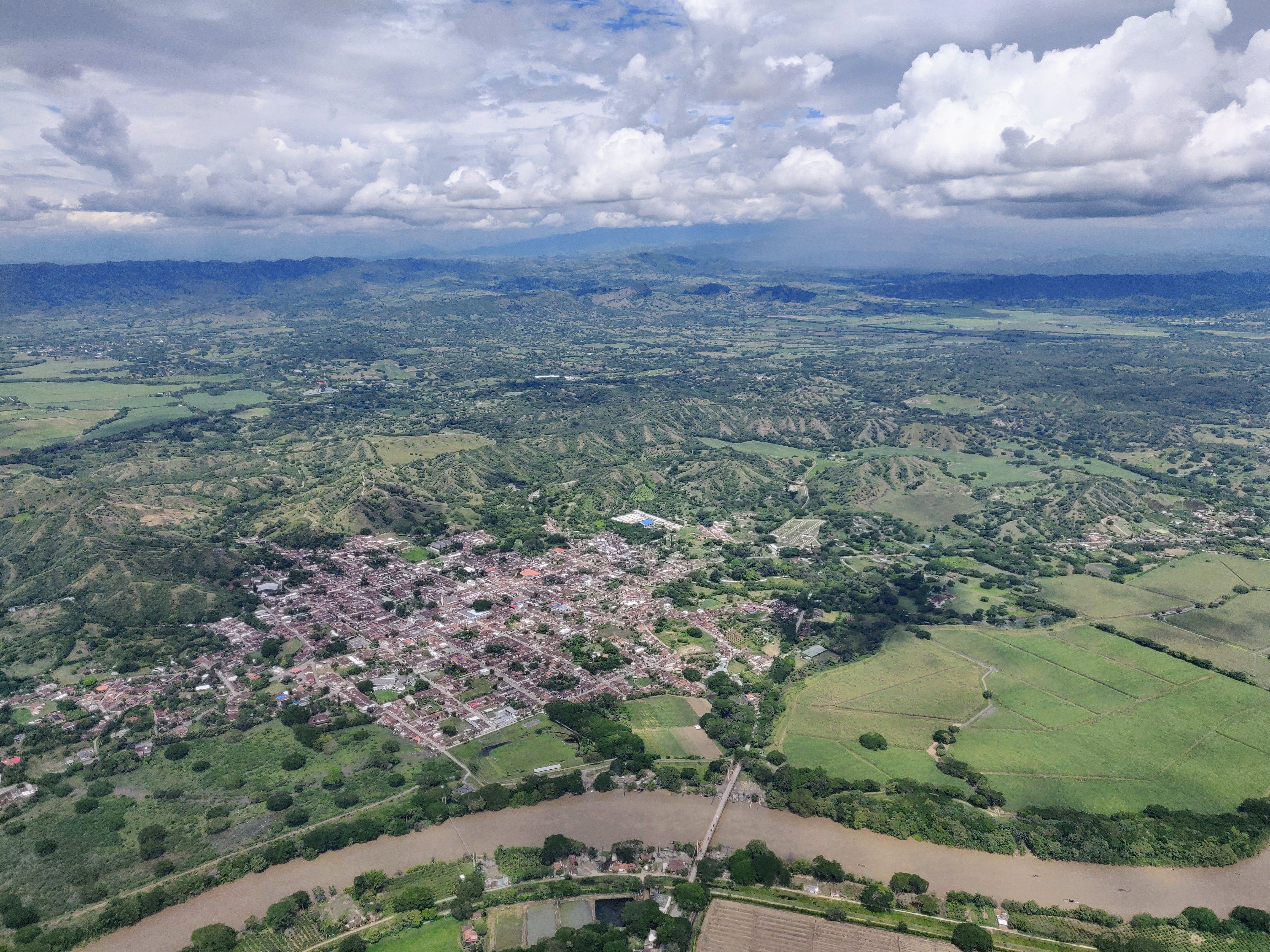 One memorable adventure was when we lost height in the middle of the valley, landed and some 11 years old kid helped us walk an hour to the river. There we had to shout to a guy on the other side to send a ferry over. Afterwards we hitchhiked with a friendly family back to Roldanillo. We were so dirty, sweaty and happy. 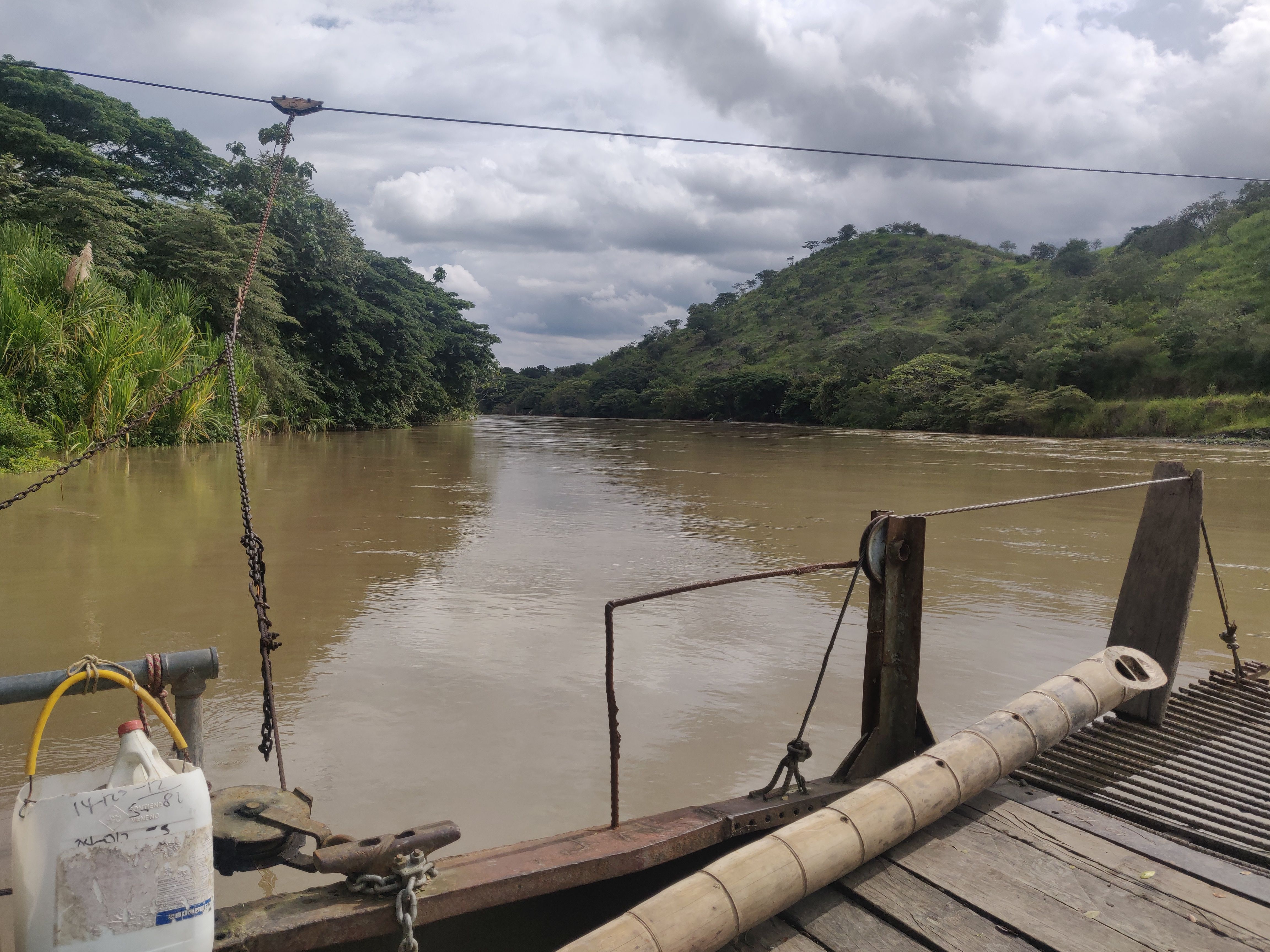 In Roldanillo, we also met Eddy and Patricio, some awesome pilots from Ecuador so our paths shall meet again later in our journey. It was election day on Satuday and the whole country was in a alcohol lockdown. Yet, those guys managed to find us two bars that (initially reluctant) served us the golden drinks. 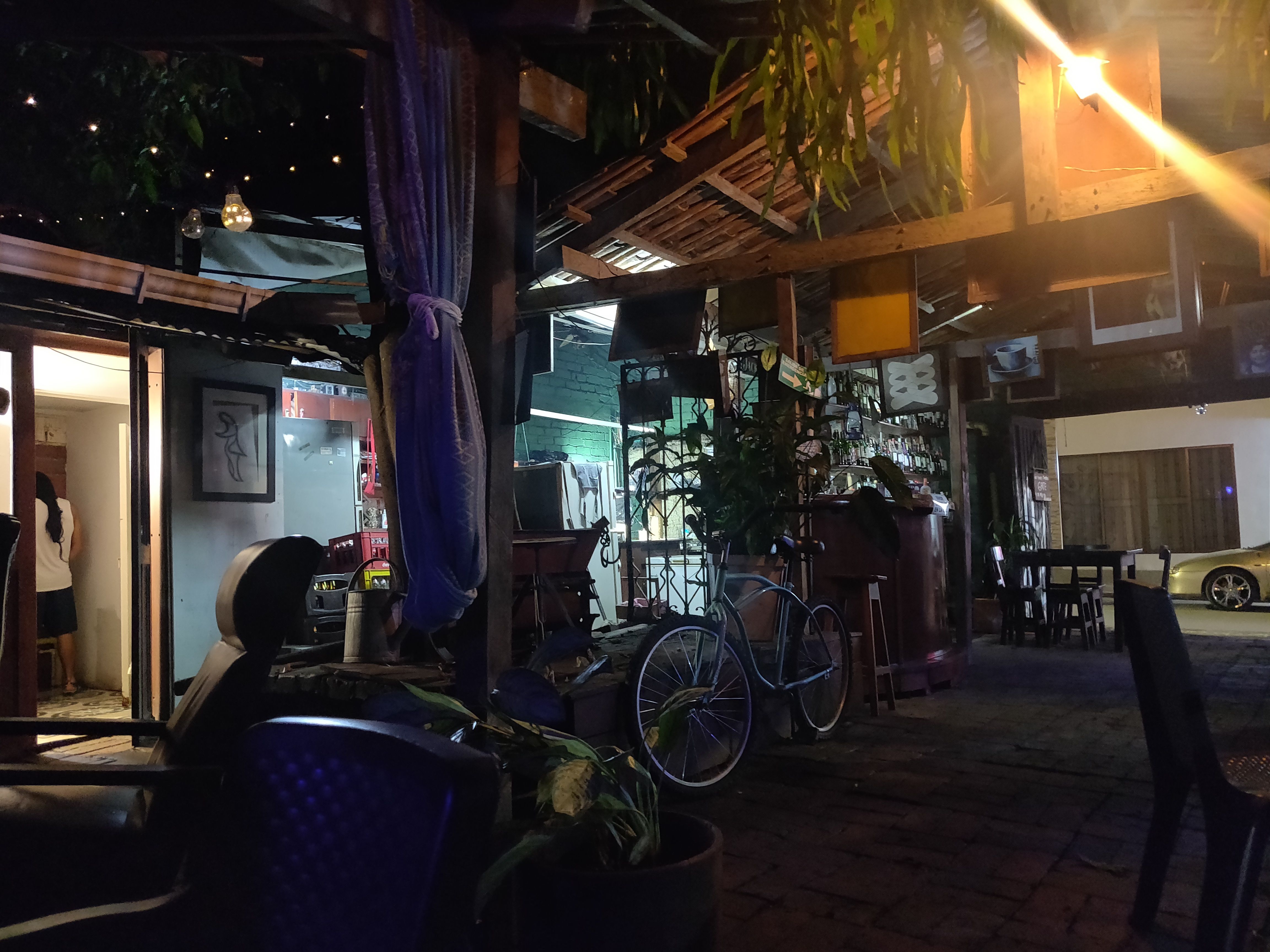 We flew every day at least 20-30km and the last day, we managed to fly to Zarzal and La Paila above a sugar cane factory. It smelled sweet/caramelly. We landed on a nearby football field and again, curious awesome kids helped us get to the bus station and back to base. 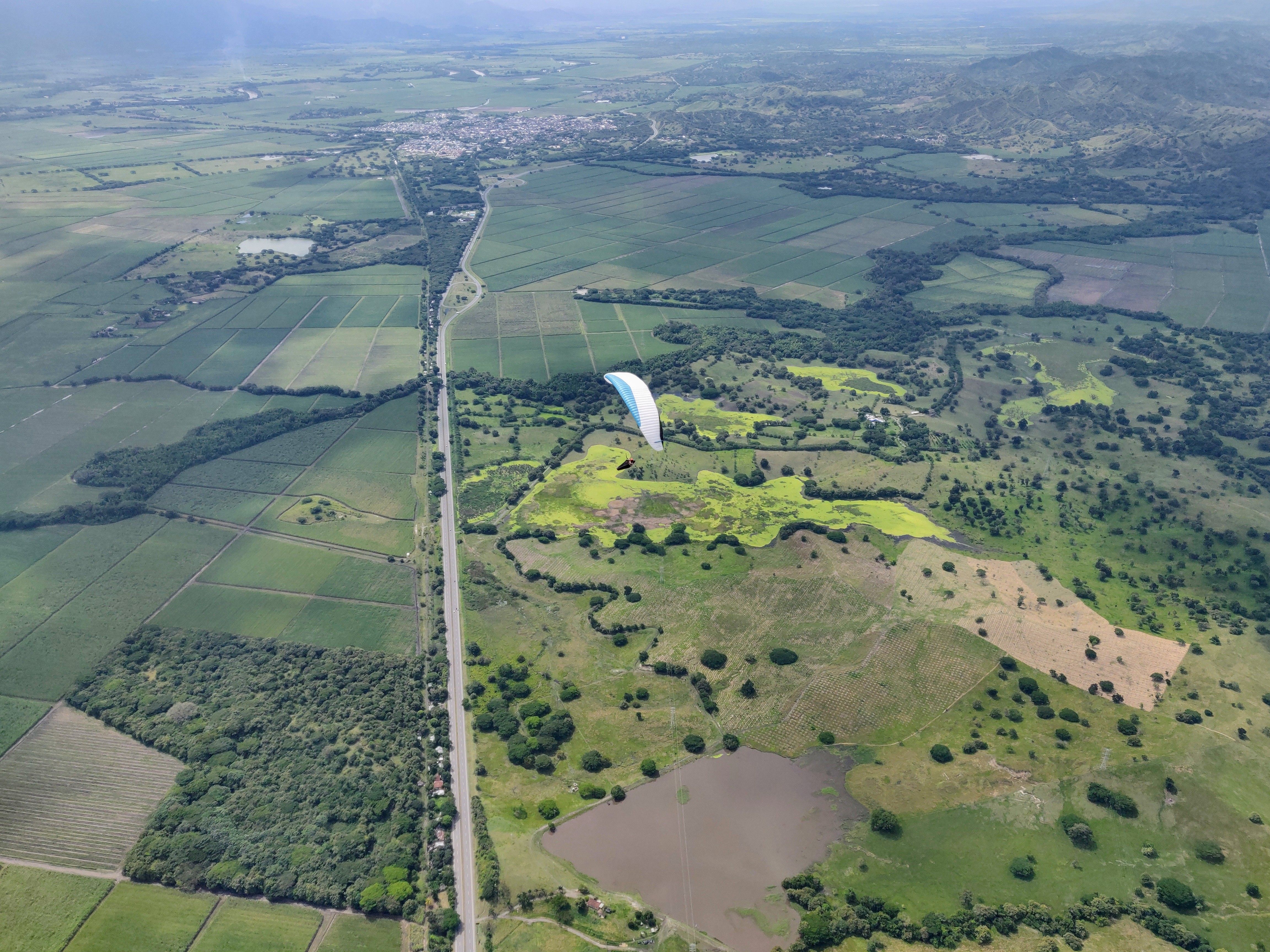 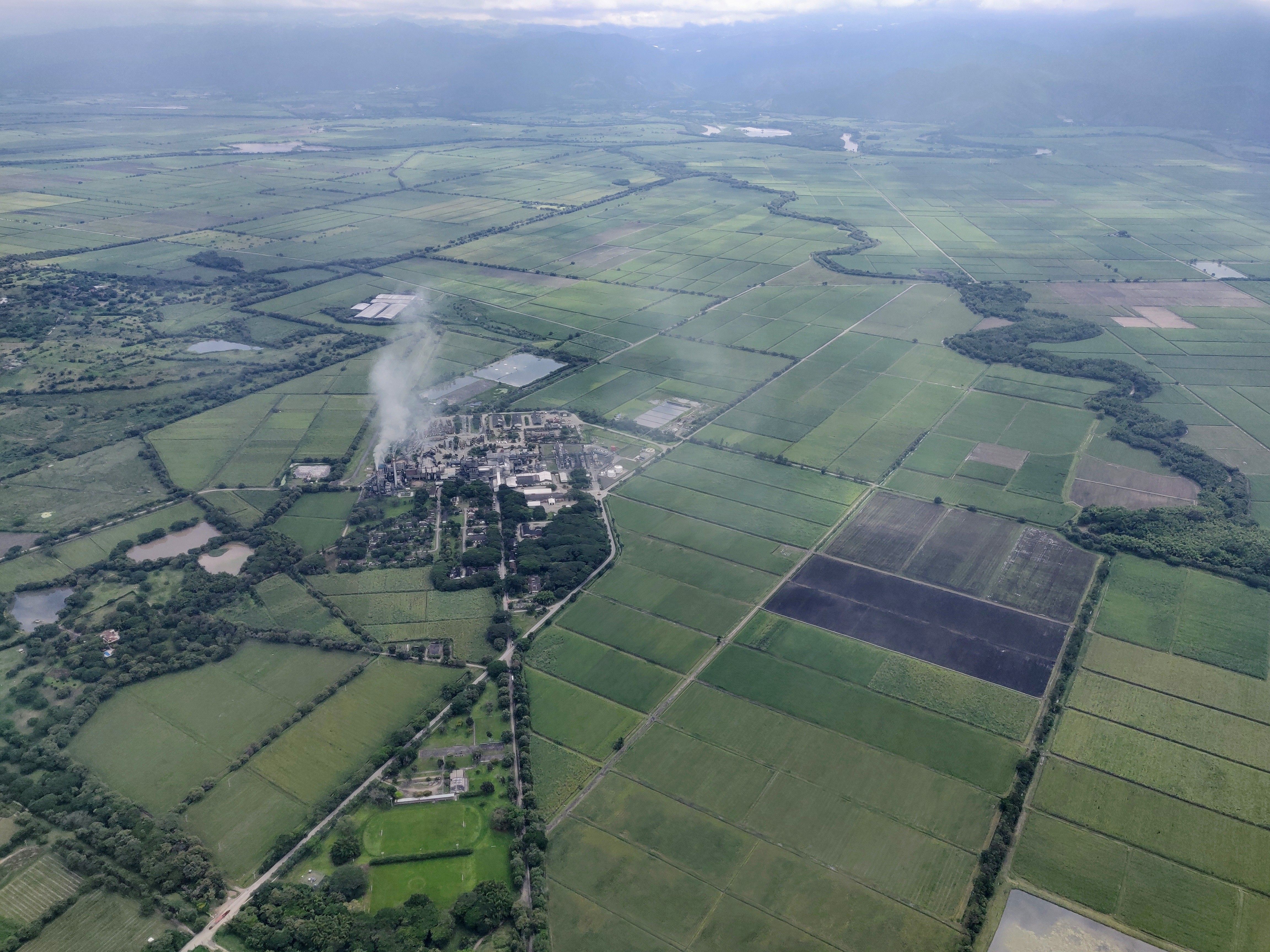 After four days in Roldanillo we wanted to see something else and went to Piedechinche. It's further south east and weather wise tricky since it's thermally better for afternoon flights ... but afternoon usually means rain. We arrived at 1 pm and I called local pilot Edgar ( +573168004278 ) who asked me when we want to fly and I said 'now?' He picked us up, got us to the takeoff and we flew two amazing flights. he first one in actual rain and the second - as a sunset flight - into the flats and landed near our new hotel in Santa Elena - on a field with some neighboring very curious cows. It's really good to fly and land together. Lifting/crossing barb wire fences is a two person job! 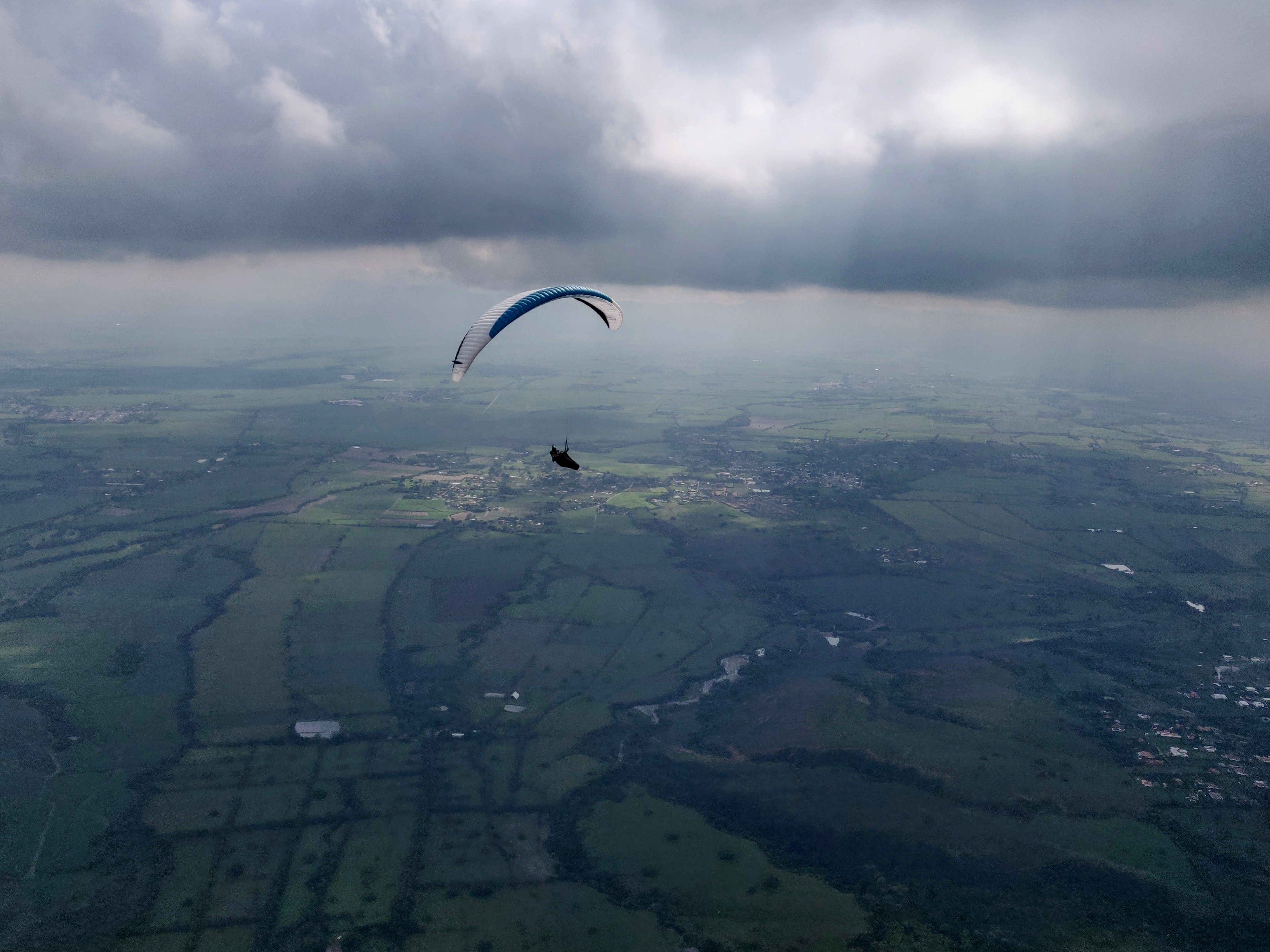 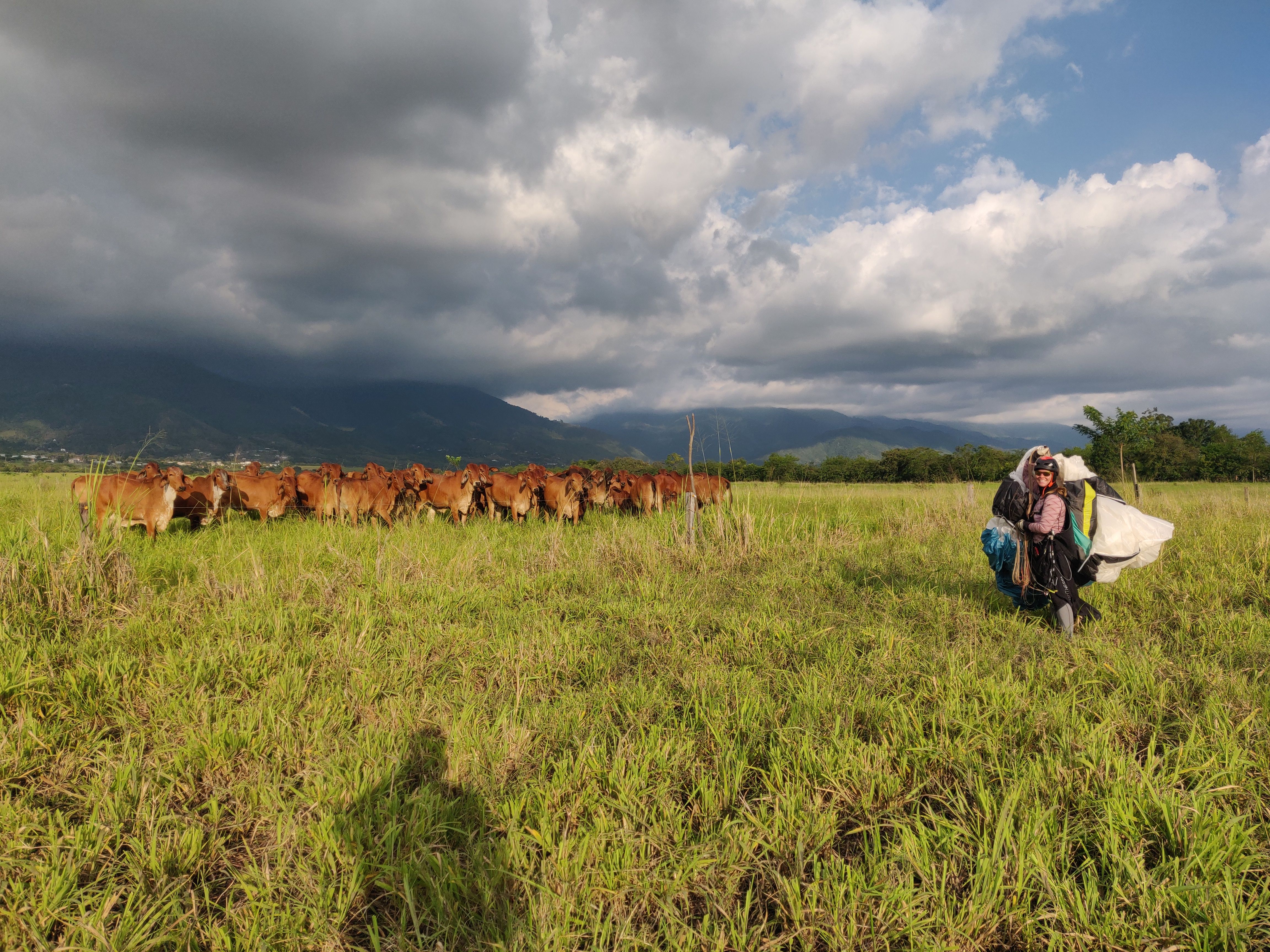 Here we met long time traveller Stephan who is doing our reverse route (South to North). He was renting his paragliding equipment for 60$/day locally.

Together we tought a local restaurant waitress how to mix Whisky Sour. It was the best we ever had.

Stephan now flies with Silkes secondary vario, so it is put to good use, and hopefully has amazing experiences up north!

Next day it was raining and we decided to hit Cali and go to the ecuadorian border.

In Cali we went to the "Zoologico" which has so many cool animals. It's a really amazing, hughly recommendable zoo! 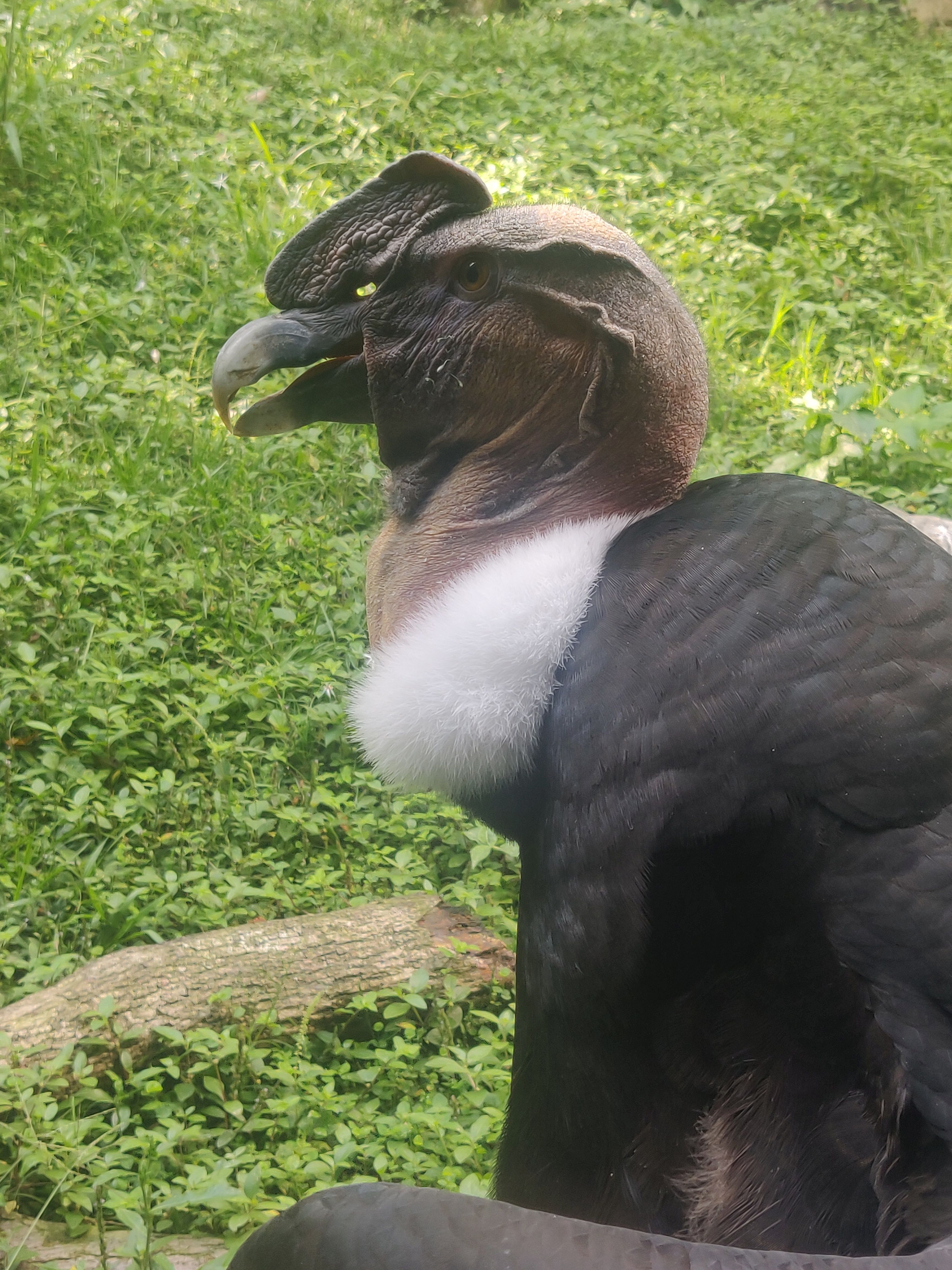 A huge "Condor" in the zoo. An ever great companion when flying, close up!

In Cali we also went through a few stores until we found one that sold original GoPro cameras. "Hold your horses!" you might think, "What do you two need a GoPro for?" Well. Let's say, we found some last minute deal for an activity that - if all goes well - we'll be doing in Ecuador. Fingers crossed!

So we took the night bus down to Ipiales. A tour, most people suggest not doing since it's a dangerous region with lots of robberies.

We weren't robbed but Silke forgot her rain coat in the bus. Generally we felt that what locals told us, strongly contradicted the fear governed internet sources. This and Covid probably made many people stay home and that is a pity. Travelling expands yours and your companions horizons.

Anyway, it did get more adventurous. We arrived in Ipiales at 6 am in rain. The town looked sad. Many poor people lie on the sidewalks, all buildings are grey or brickstone colored. It's the first time in years that I felt a bit uneasy. Anyhow, we decide to sleep off some lost night bus hours, eat some delicious soup in the city center and and then visit las Lajas. What a beautiful church! 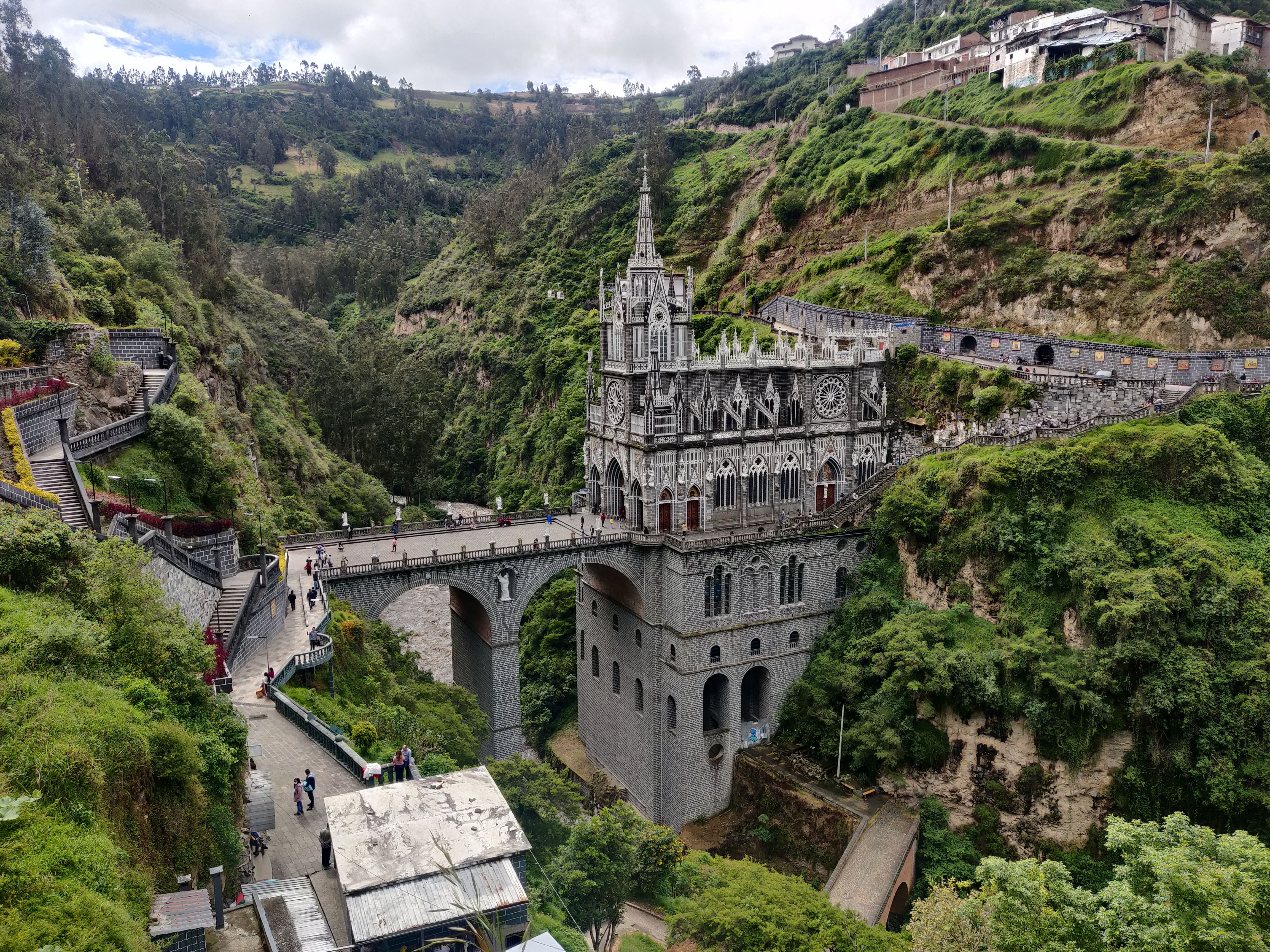 Taxis out or back from Las Lajas go for 10'000 COP. We walked from the Mirador and took the teleferico back (12k COP). Highly recommended!

Ok, so it's time to cross over to Ecuador but is it a good idea? The protests are in full swing on this 25.6.2022 despite many had advocated that the demonstrations would end soon. But going back North felt weird and we're here for an adventure.

Literally, we were the only tourists in Ipiales and at the border. How can we have such a great time while no one else is here? to be honest, even though all locals are so super friendly, these last days sometimes felt post-apocalyptic.

Anyhow, we already start missing flying again, so let me stop here and tell you next time how we managed to paraglide in Ecuador! See you!