Crusing from Italy to Slovenia 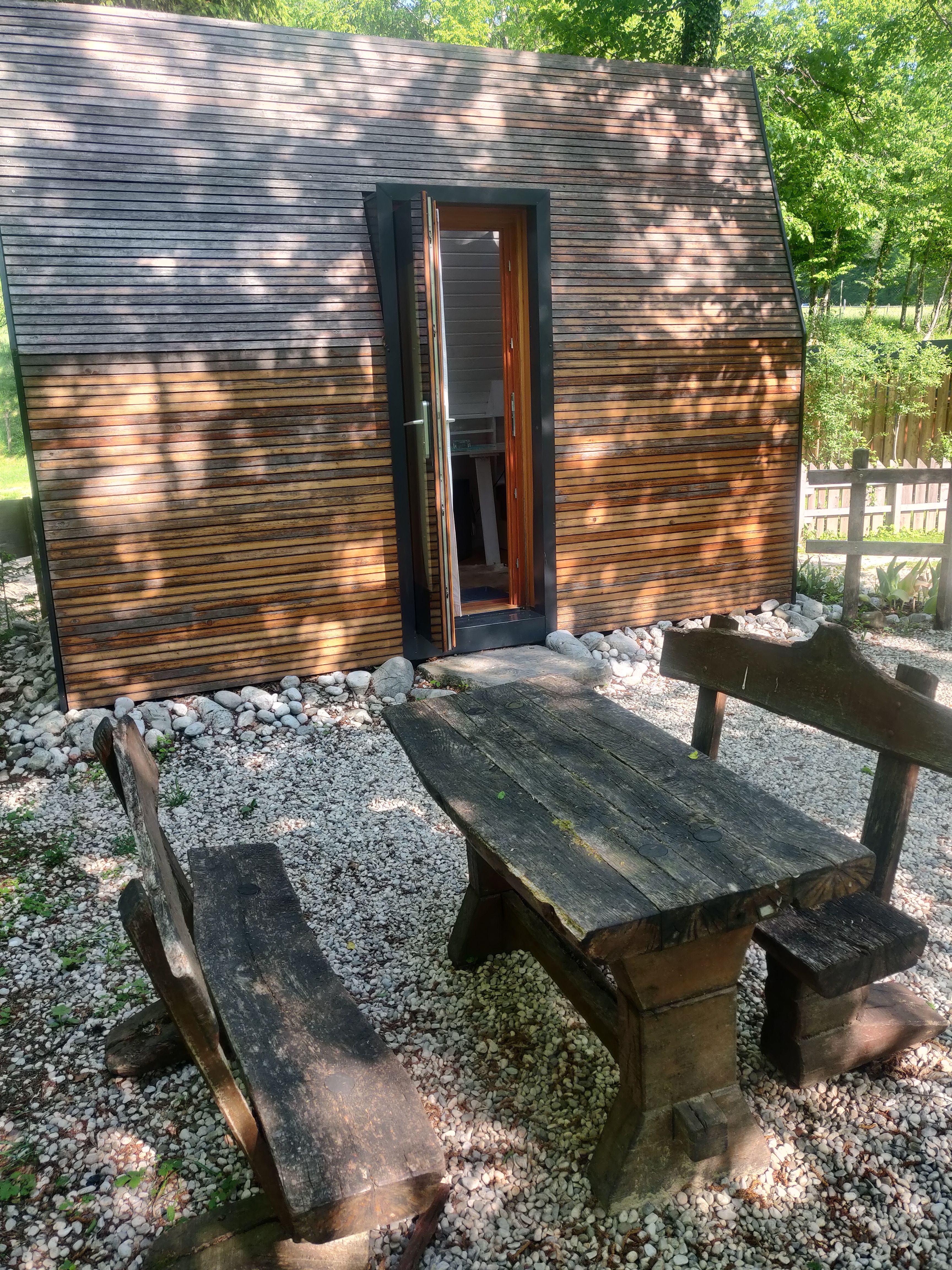 How we got here from Zurich is what I'd like to recount in this article of our first mini adventure this sabattical!

On Monday, we took the train from Zurich to Bassano del Grappa. By bus we arrived in the evening im Semonzo where we stayed in the Garden Relay hotel. It is the first shuttle stop which means you get a seat for sure. A room costs 100EUR for two persons but the inexpensive food/drinks and astonishing breakfast buffet make up for it!

From the upper take off - there are two - we instantly gained altitude and marvelled at the view along the cliffs and over the huge Po flats. 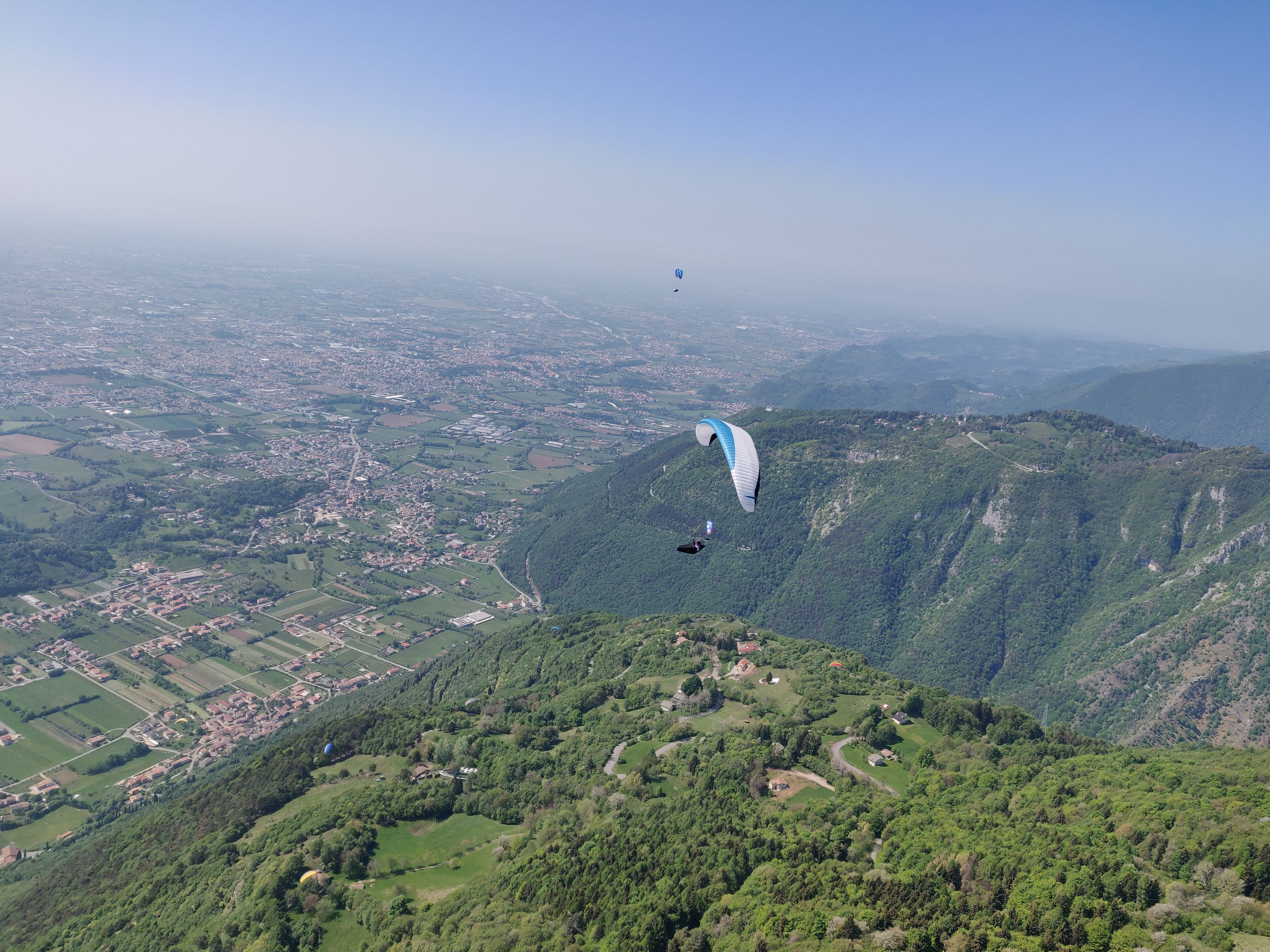 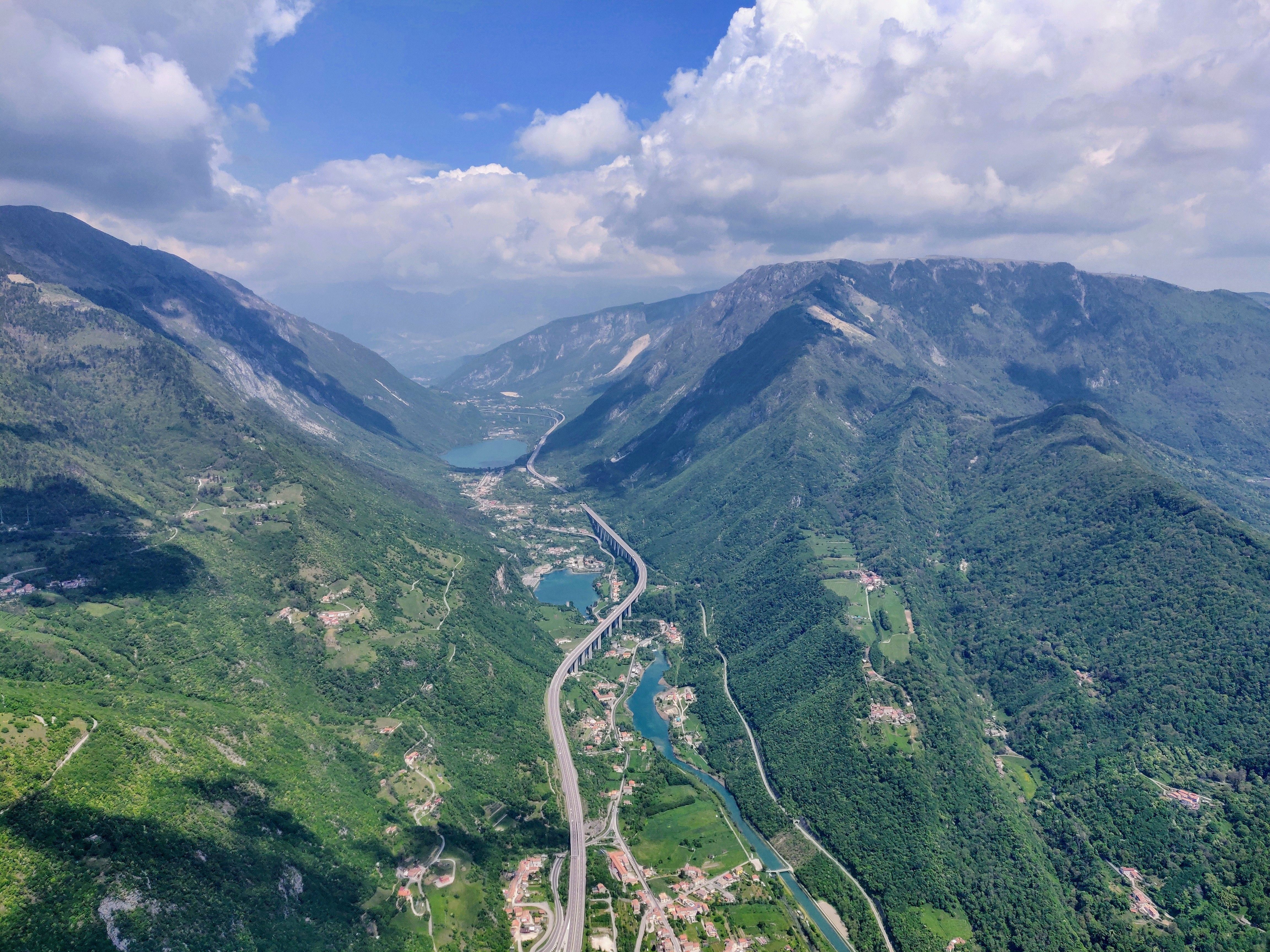 Along the ridges, we didn't always have good landing opportunities. Turns out, Italians like wine and they plaster all fields with wineyards. 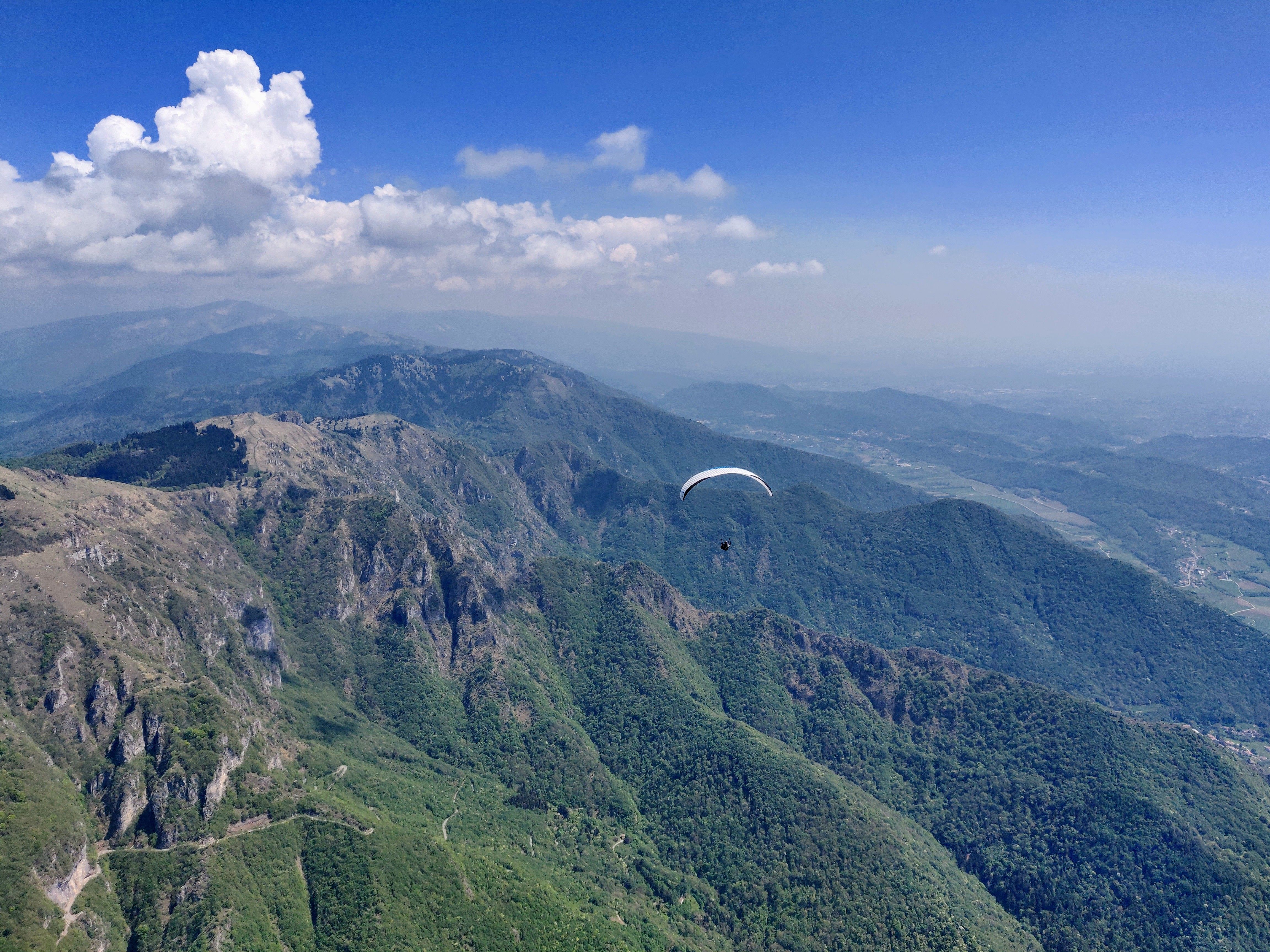 Anyway, we were able to cross into the Friuli region where Silke got a huge collapse and the clouds were dark grey, already, anyway, so we decided to land near Sacile after a flight of about 70km.

Seems it's hard to catch a lift by car so we took some bus to Toppo/Meduno. Bus stops/schedules were super easy to find using google maps. We didn't plan to visit Meduno, it just looked like a suitable flying spot on google earth.

We arrived at 17:10 and indeed, there was a proper landing field with a bar/restaurant house. The host, Davide, told us, the last shuttle for today left at 17:00 already but we could hike up. It's about 1.5h. We could still catch a flight since evening soaring is possible till around 8pm.

After almost 3h hike and the sun setting and us having reached about 2/3 of the way up, we pitched our tent, threw some pasta on our burner and called it a day with this beautiful view: 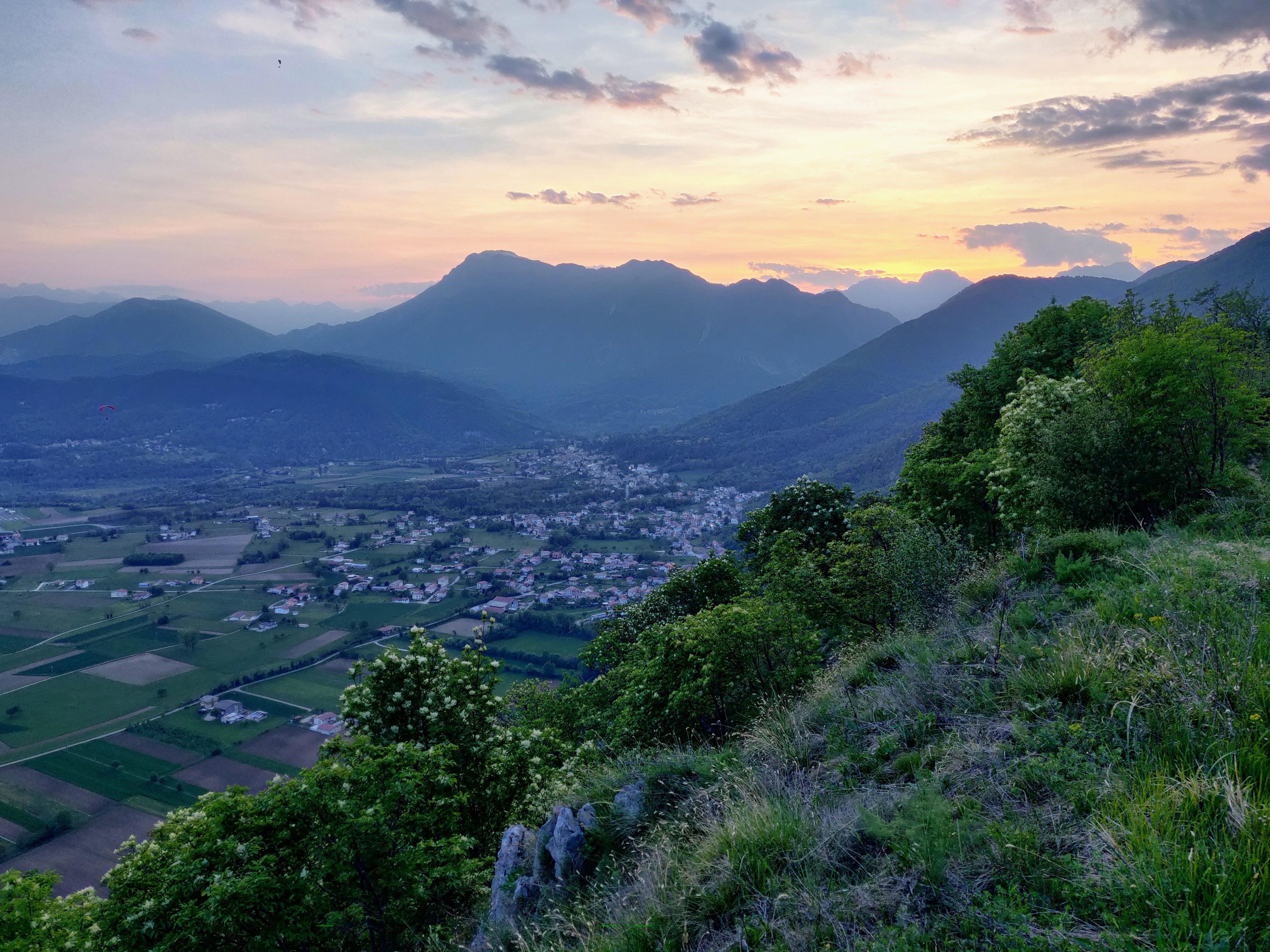 The next morning we hiked up the remaining 300m of altitude willing to refill our water bags but the refugio on top was closed.

So we did a little aerial sightseeing tour and landed to take the bus to Gemona.

For buses in Friuli, the app TPLFVG suited us, nicely, but it doesn't always show connections, unfortunately.

In Gemona, the infrastructure is a bit funny.

There are two shuttle stops (Campo Sportivo di Bordano and Restaurant Aghegole) and the buses run with 8 people on 9am, 11am, 3pm and 5pm.

Seats have to be reserved using a telegram bot @VoloLiberoFriuliBot and a trip goes for 10EUR.

We had a low base about 1300m AMSL which only slightly lifted during the day. But to cross to Slovenia we would have to switch to the back ridge and ride for about 30km through unlandable forests... which we did. Thanks also to a lot of nice birds. 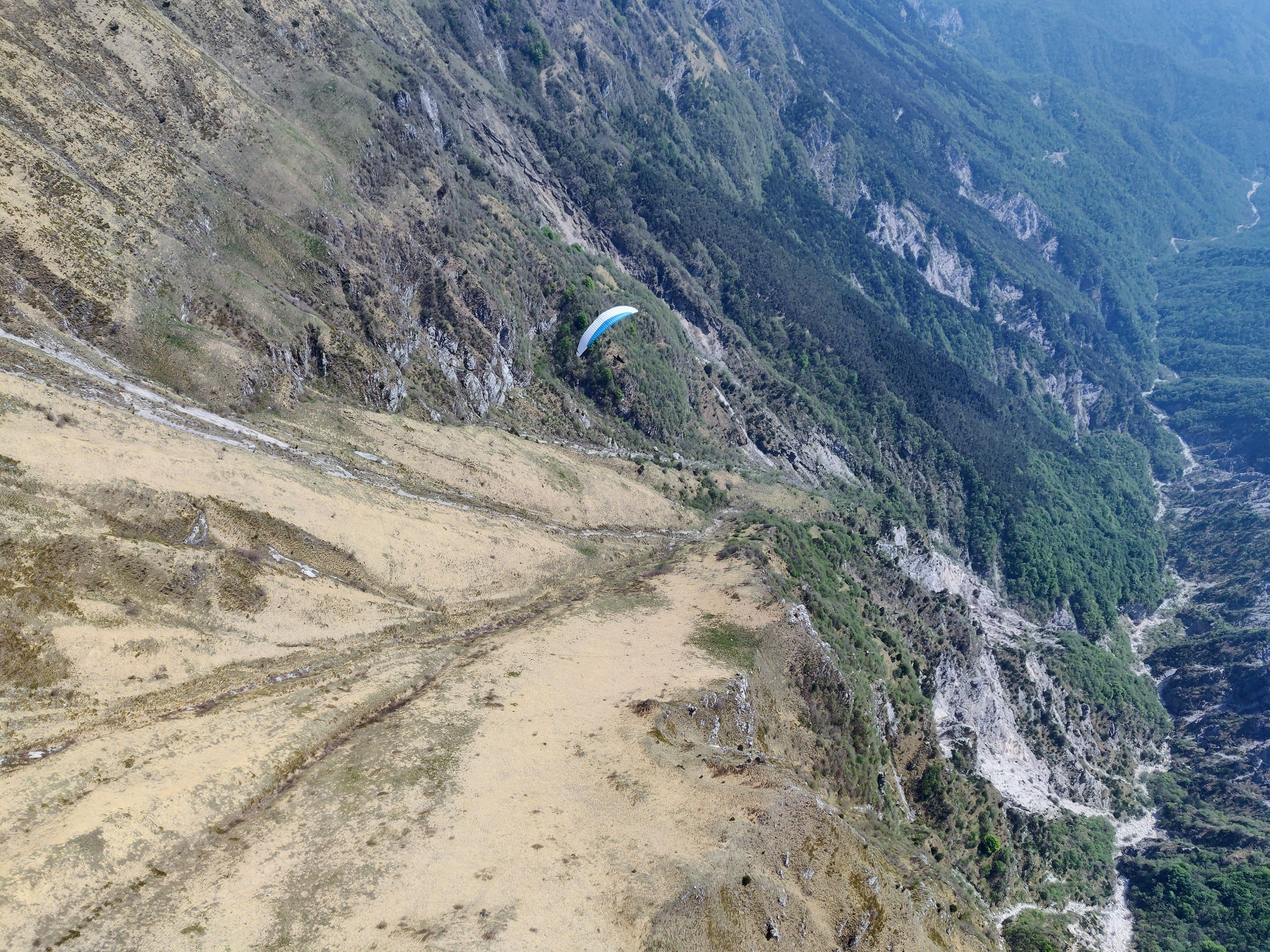 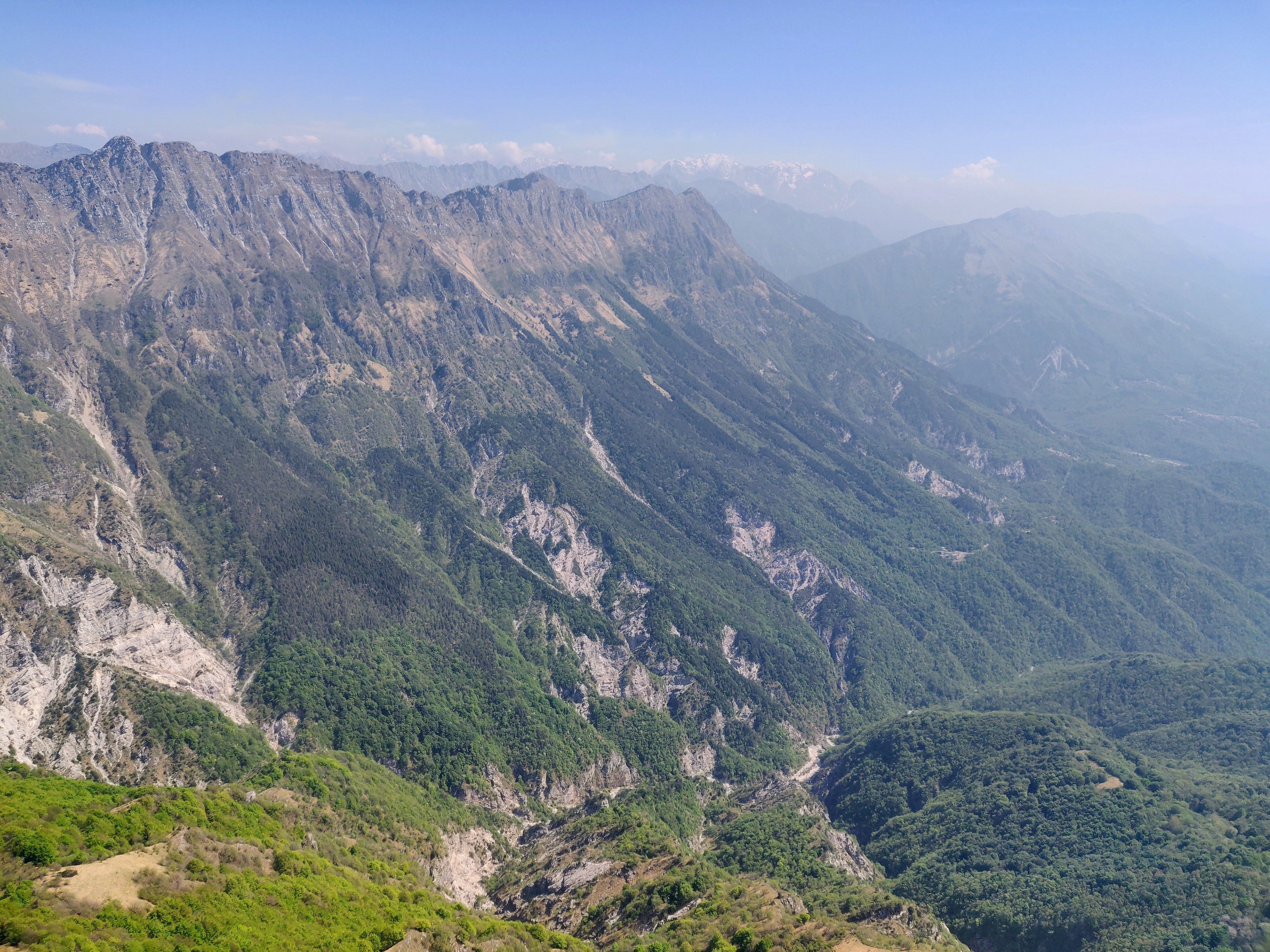 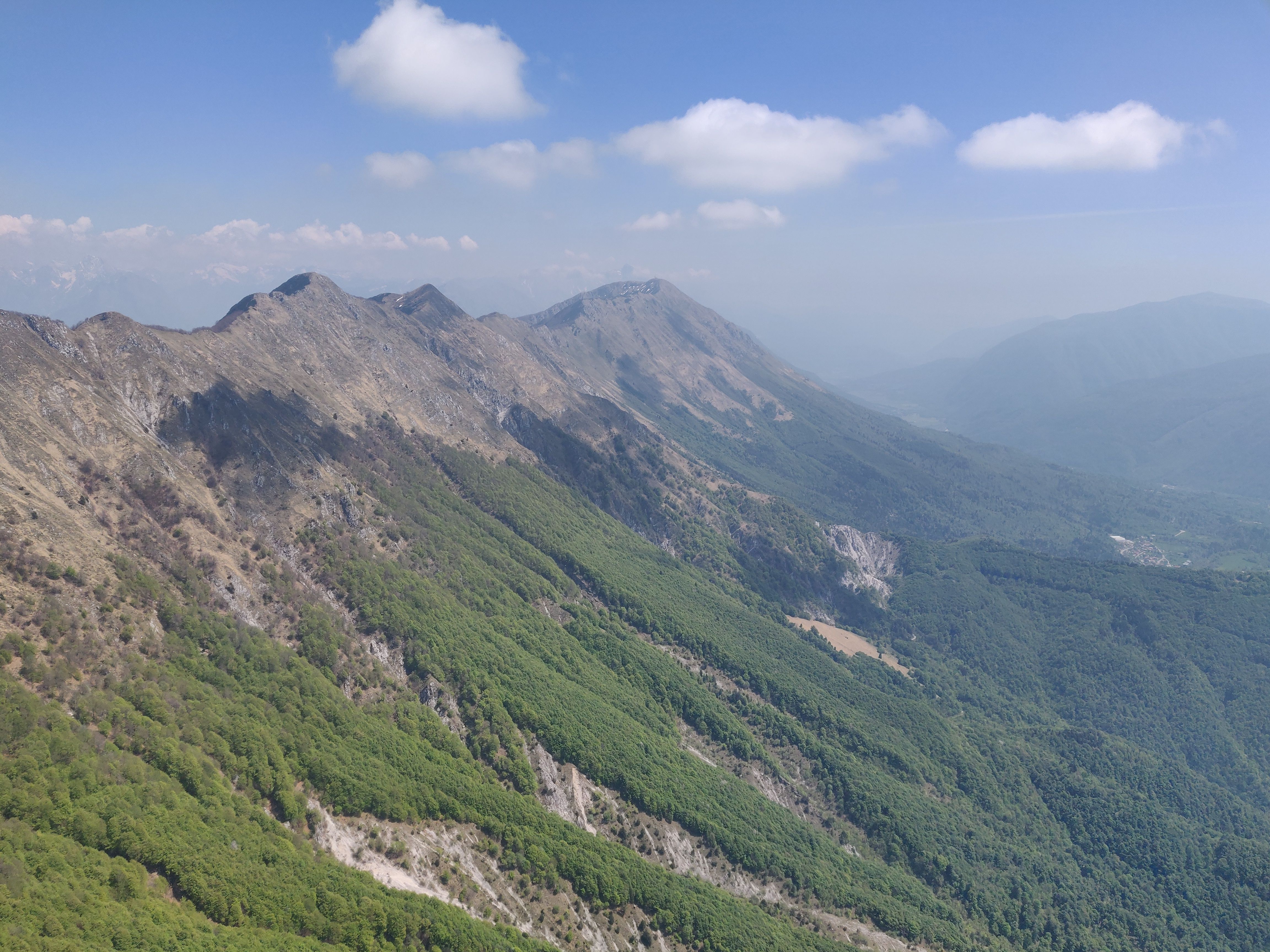 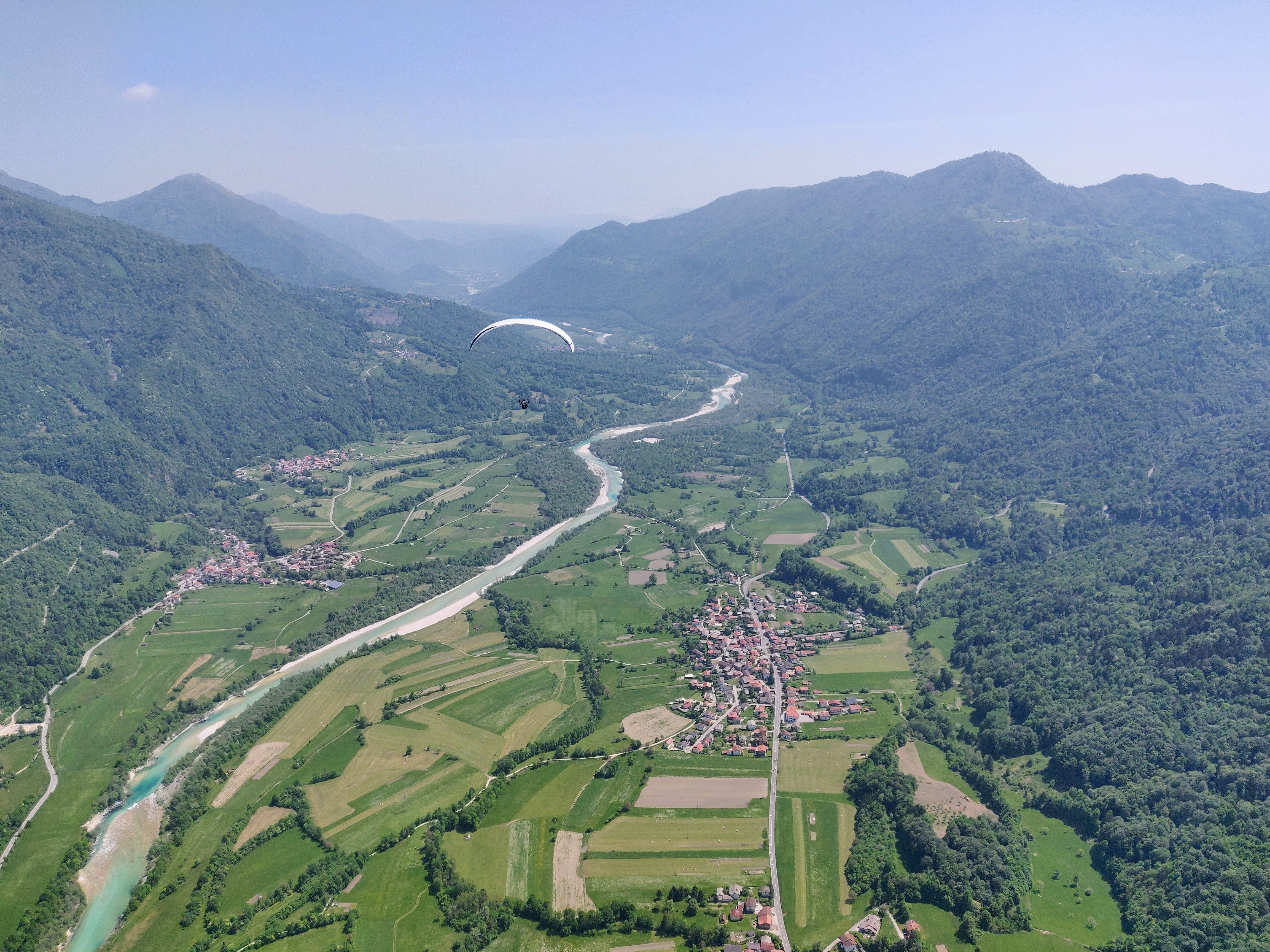 Silke on the final glide. Could have easily flown further but we were both a bit tired.

The first paragliders we met at Stol. Until then, we had been completely alone in the air. What an adventure!

In Ladra we landed and celebrated our first major cross border flight. I decided here to top up my roaming internet because we'd definitely stay a bit longer outside of Switzerland. 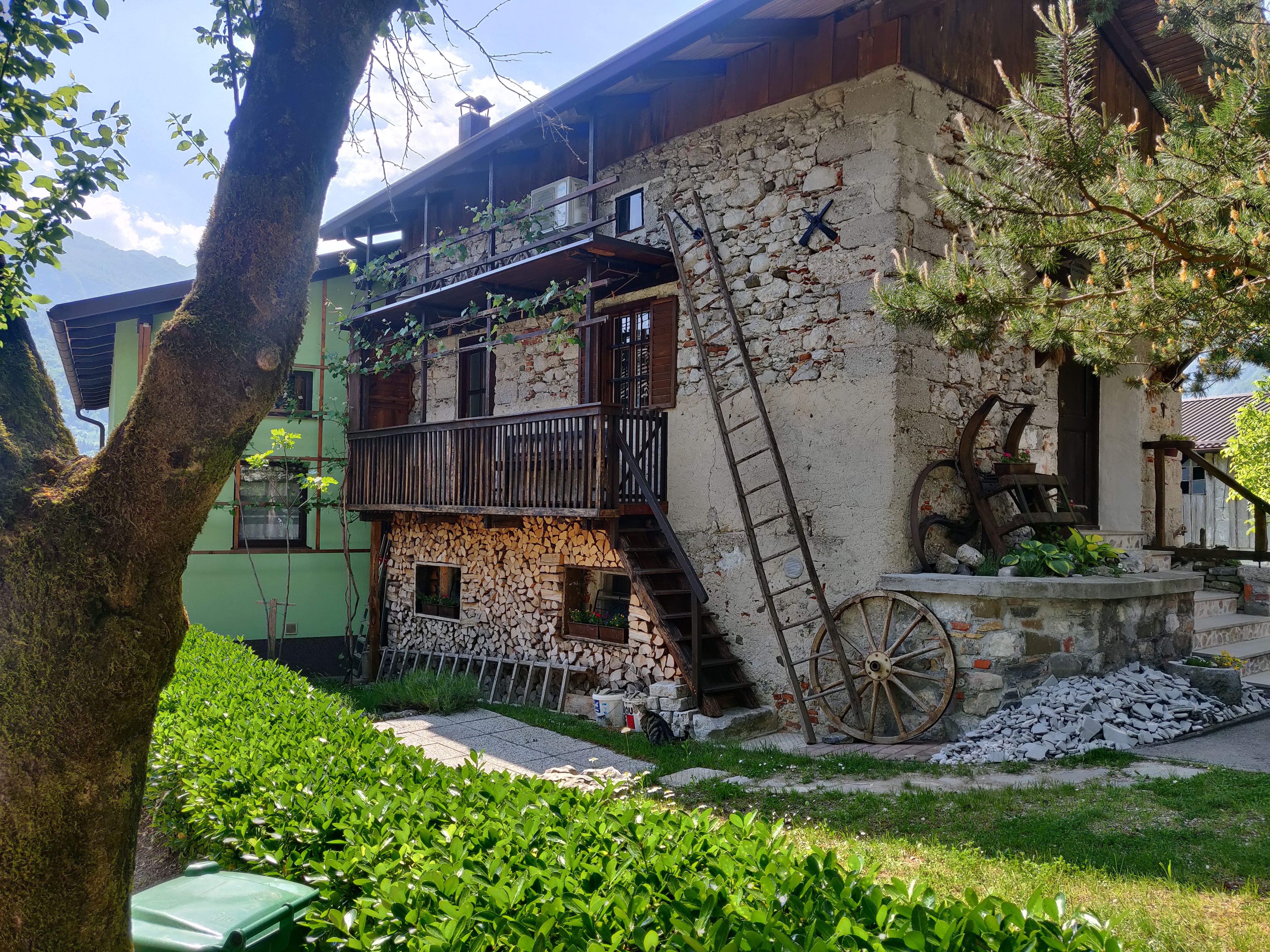 One of many beautiful houses in Ladra/Soca valley

Slovenia seems to have much nicer drivers than Italy.They see you sitting and actively invite you to take a lift. Amazing!

That's how we landed in Kamp Koren where we stayed two nights.

On the second day we flew from Stol to Tolmein and back. Thanks to Klavdij - Shuttle driver and Wolfi - a 25 year long austrian pilot, some lovely people we met here!

The shuttle from Kobarid to Stol was 20EUR each but it was an hour drive, so it's ok. 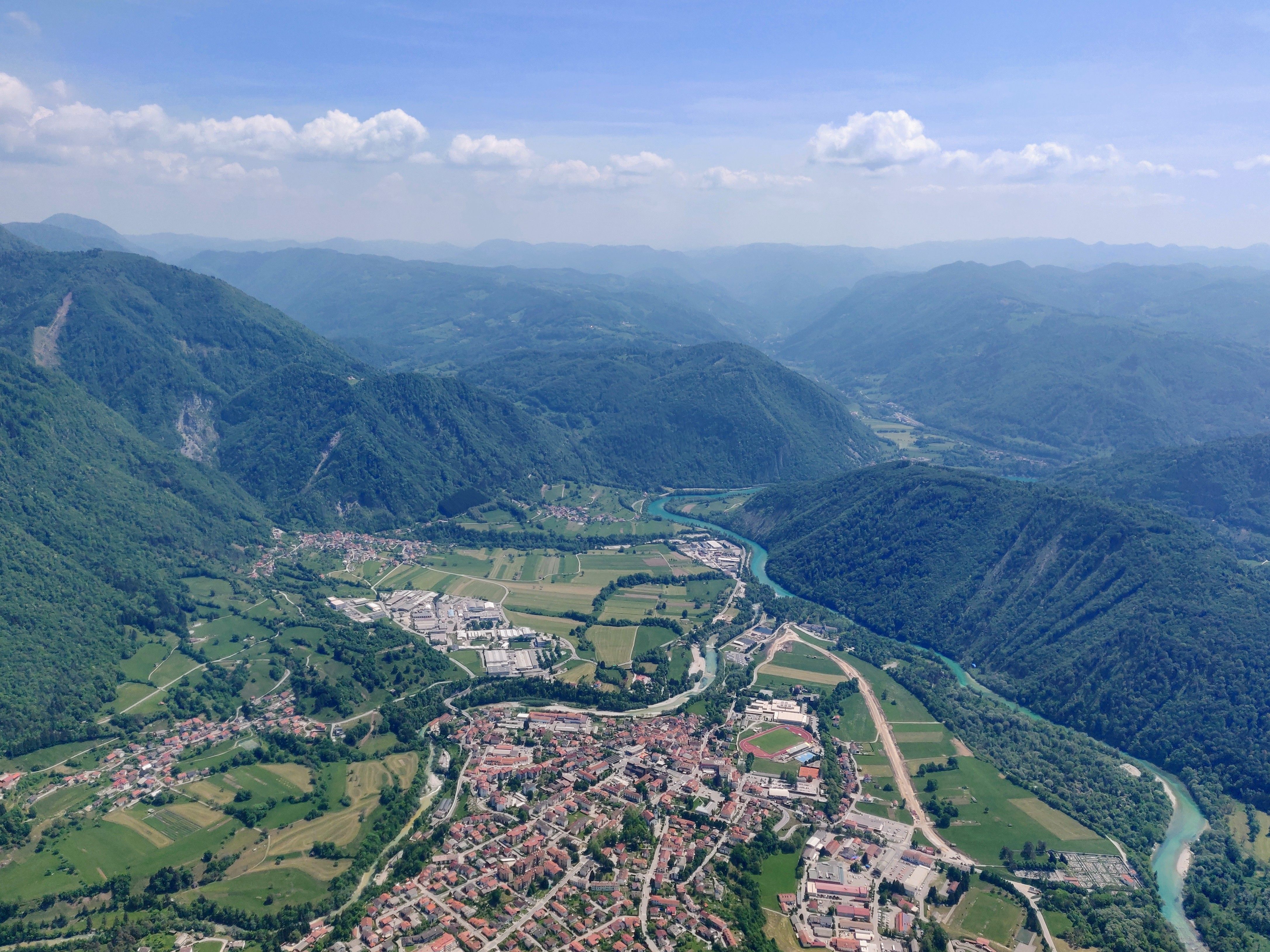 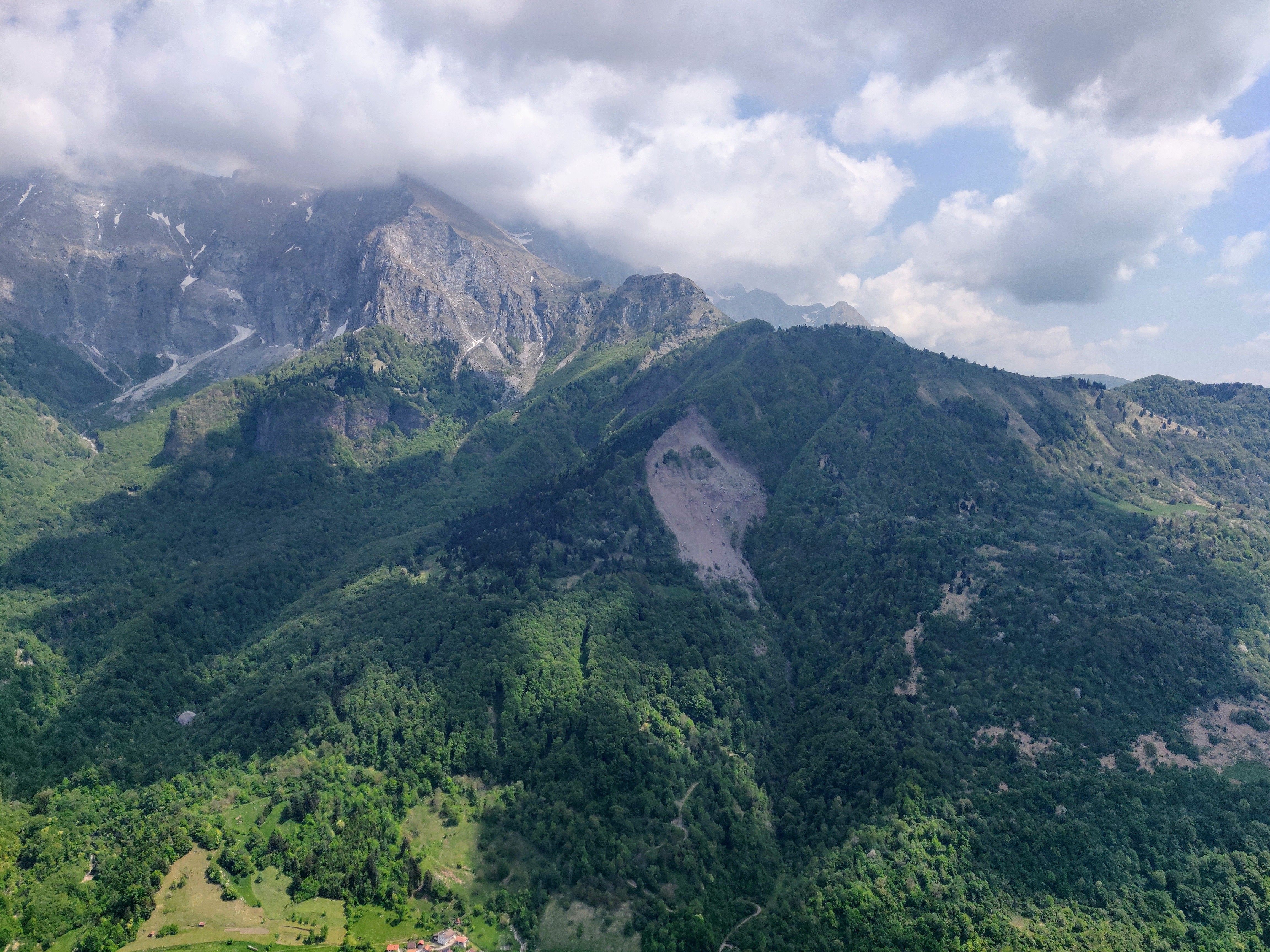 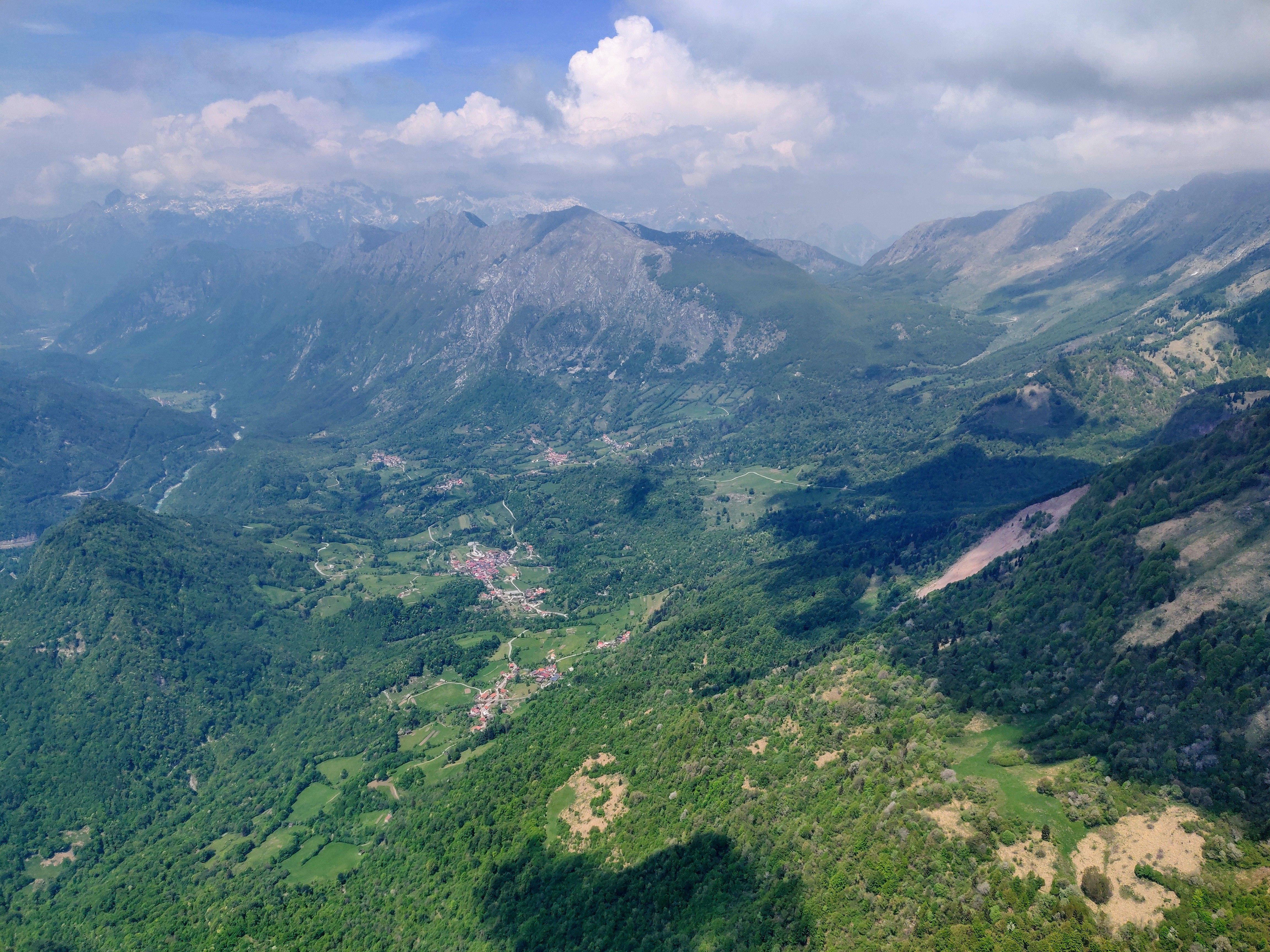 View into the upper Soca valley towards Zaga

See you on the next part where we move back to Switzerland via Austria!